How These Bay Area Breweries Got Their Names

To learn more about those names, we talked to the people behind a few of our favorite Bay Area breweries. Dive in and learn a little bit about our region’s best beers! 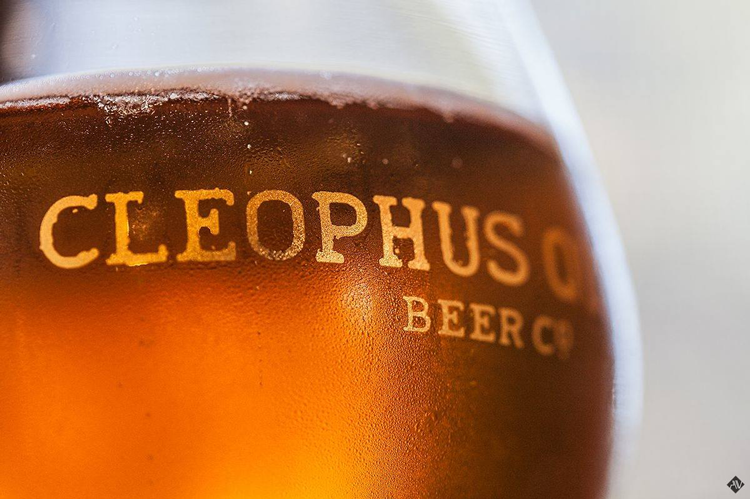 Cleophus Quealy (pronounced Clee-oh-fus Quay-lee) is a small batch brewery in San Leandro. Since they opened their doors in 2015, the brewery has been crafting each batch by hand and covering everything from barrel aged Belgians to dry-hopped American styles and even fruit fermented sours.

But the motivation has always come from the original English names, Cleophus and Quealy. Jessica, the general manager, told us all about the owners’ inspiration. “Dan had a great great great grandfather named Cleophus who was a railroad man in the 1800s,” she explained. “Peter’s mom’s maiden name is Quealy so they pulled the first and last names and put them together.” Like the old, European names, inspiration in the brewhouse comes from traditional, old-world, European styles of brewing.

Jessica laughed, saying, “It’s probably our most asked question, but with a name like Cleophus Quealy, we’re ready for that. It’s not a name that is intuitive by any means.” 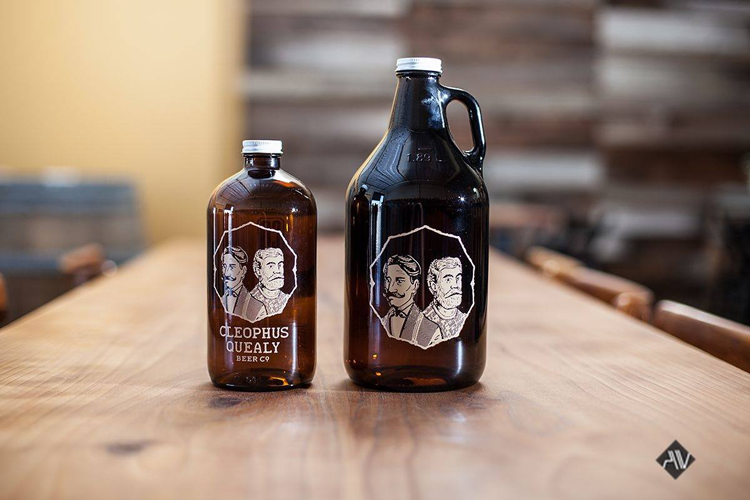 If you’re thinking of stopping by, Jessica said, “I would highly recommend the Rye or Saison to anybody coming in for the first time.” The Rye is a pale ale that she calls, “not too hoppy and really drinkable — especially in the summer months.”

And she promises there will always be a Saison on tap. “We always have the straightforward Saison and then we’ll do variants with fruit or other ingredients,” she said. “Right now, we have a Hibiscus Saison that has hibiscus and grapefruit in it. Over the winter, we did a Saison with black currants and mulling spices. It was kind of like a mulled wine.”

But anytime you come in, you’re sure to find something exciting on tap. And you’re guaranteed a cozy, comfortable setting. “The place is small, the staff is small, and everything is so familiar. We know so many of the people who come here and we get to know people so quickly. It’s very cozy and homey which is something you don’t get at a bigger brewery,” Jessica said. 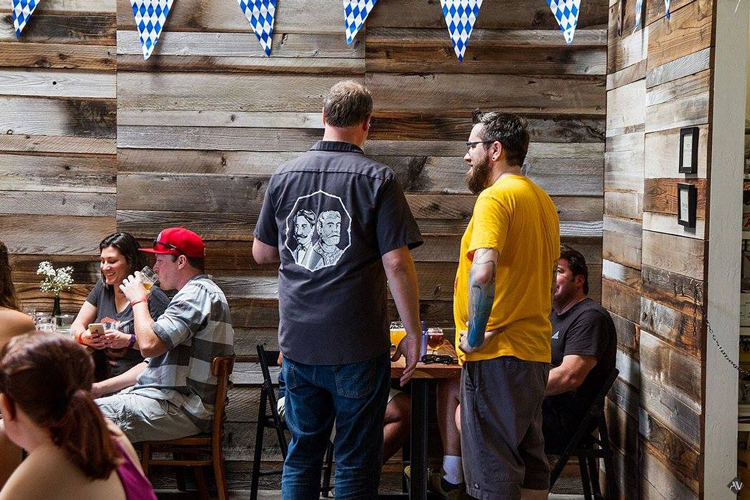 Plan your visit on the second Saturday of the month and you can be a part of Saturday Social, a monthly fundraiser event for a local nonprofit. 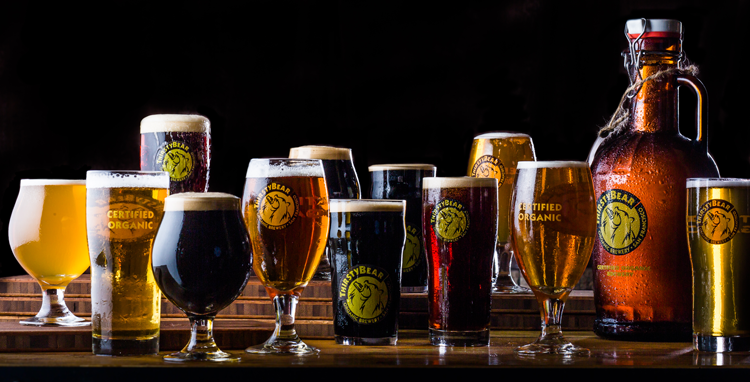 Whether you’re tasting the Spanish tapas or sipping an organic brew, you can rest assured everything at ThirstyBear is sustainably sourced and responsibly stewarded. As the first organic brewery in San Francisco, the team prides itself on being environmentally friendly.

Ron, the founder and original head brewer, explained to us why he chose to brew organically. He said, “It’s not about taste; it’s about what it does to our water, our environment, our soil, the workers. When you make beer, you create a mash, you boil that mash and a lot of organic volatile compounds are boiled away anyway. Then you ferment it and that further changes things. By the time it becomes beer, you don’t know how the hell it was grown, but it’s a commitment to sustainability.” 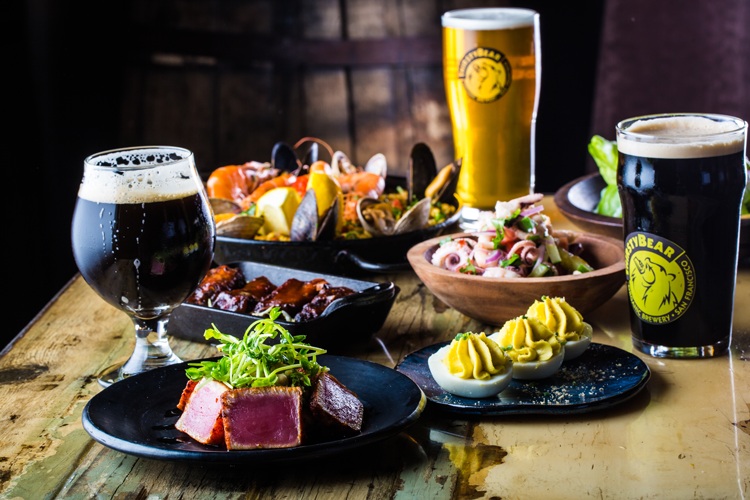 Along with insight into the mission behind ThirstyBear, Ron told us the story behind the name — and if you thought it was about a bear drinking beer, you’re right!

Back when Ron was an attorney, and five years before he started his brewery project, he was struck by a headline ‘Thirsty bear bites man for cold beer’. “It comes from an old article I read in the Chronicle when I was home brewing and dreaming of opening a brewery,” he said. “It talked about this bear who walked into a pub in Kharkov, slapped a guy named Victor Kozlov on the back, and tried to grab his beer. The guy resisted and the bear bit him on the hand and took his beer. The bear drank his beer, left the pub and fell asleep on a park bench. It was an escaped circus bear. I thought, ‘Oh, I’ve gotta use this somehow in the project that I’m putting together,’ but I had no idea how. So ThirstyBear actually became a placeholder. Then eventually, instead of a placeholder, it became the real name.”

Today, ThirstyBear is still inspired by history. Most recently, they celebrated American Craft Beer Week with a historic beer series. Ron explained, “When the Germans first came and were making beer as settlers in San Francisco during the gold rush era, they brought lager yeast from Germany. They didn’t have refrigeration so they were using lager yeast and fermenting it at ale temperatures. So we have three beers brewed with the common yeast.” You can still get The 49er, the California Common and the Cable Car IPC in the taproom, so stop by today! 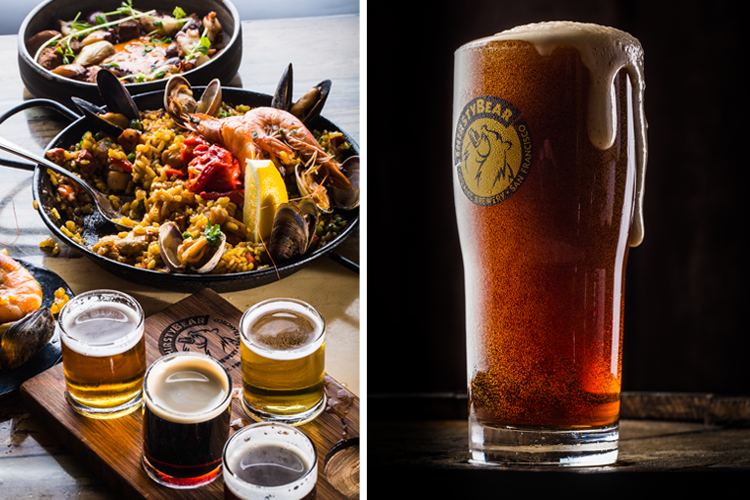 If you’re a first-timer and you’d rather try a ThirstyBear classic, Ron recommends the Howard Street IPA or the current brew from their Stave Series. “It’s like having to choose between your babies,” he said. “But if I have to answer, I’ll go with those two.” 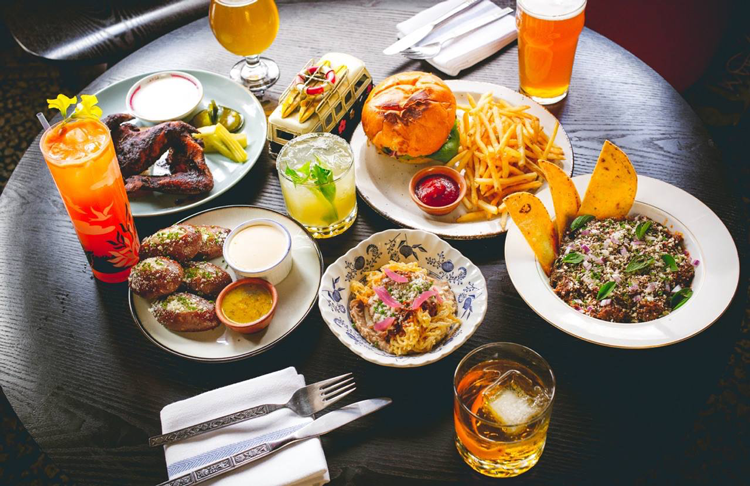 You could say the team at Old Bus Tavern has a thing for old buses — and craft beer and artisan food — but we’ll get to that in a minute. One of the founding team members, John, explained, “Old Bus — the name and the idea — started because of my 1938 Westfalia Volkswagen camper. I restored it, toured in it, and have been all over the US in it — including trips with my partners Ben and Jimmie. Before we opened, we wanted to take a road trip together through Texas and the Southwest to learn more about chili and the history of chili peppers — which has become the touchstone on our menu.”

When Old Bus finally opened just two years ago, the team started a crowdfunding campaign for a second bus, a 1971 Volkswagen. “We use it for catering, for beer festivals, and for delivering kegs around town,” said John. 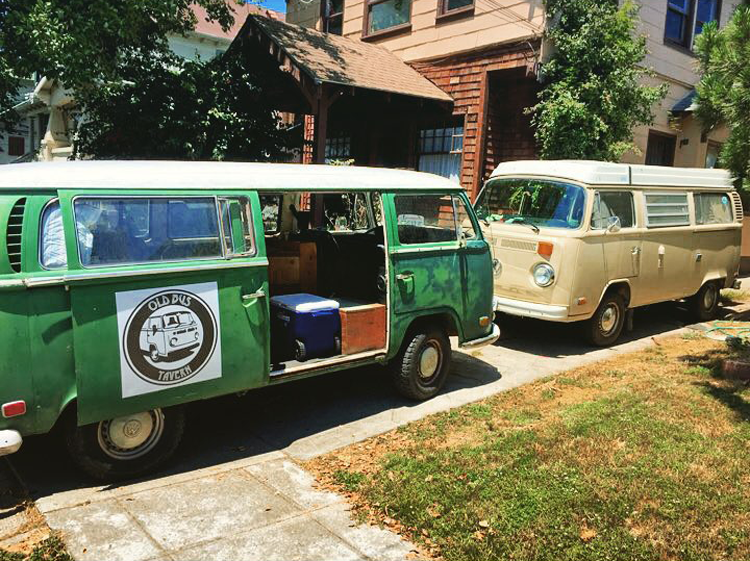 And the character of an old, VW bus is exactly what drives the brewery and the kitchen. “The bus is slow and steady; it’s humble; it’s simple. That’s what we try to do in our brewing. We focus on making drinkable, approachable interpretations of classic styles with a modern sensibility.”

“But our place is about the food as well,” he said, explaining their beers are designed to match their mouth-watering food menu. “We try to brew our beers to be food-friendly. They’re sessionable so you can enjoy them with a meal.”

And when you come in for a meal, a brew or a cocktail, John recommends tasting the Meyer Lemon and Basil Saison. “It’s one of the beers we’re known for. We use fresh Meyer lemon zest and fresh basil. There’s a lot of labor that goes into preparing all the fresh ingredients and infusing them in the beer, but it’s really a labor of love.” 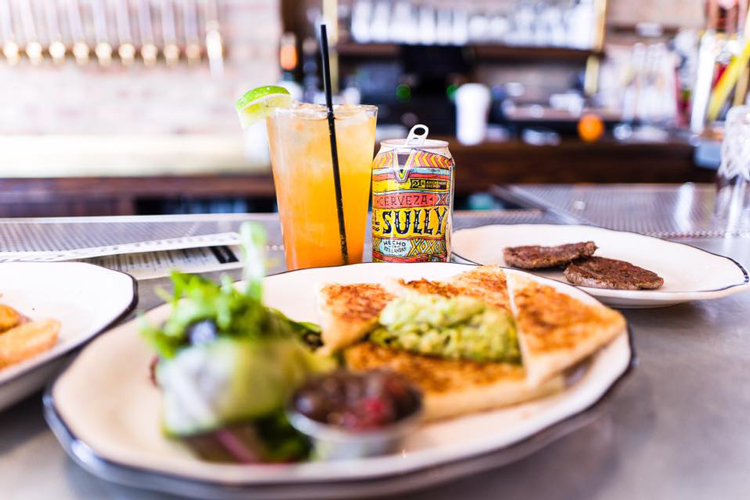 21st Amendment Brewery was founded in 2000 by beer geeks Shaun O’Sullivan and Nico Freccia. You may think a craft brewery named after the amendment that repealed Prohibition would be pretty self-explanatory, but there’s more to it than that. In a video profile by Good Company, Shaun and Nico told the story of their now booming brewery.

“The name 21st Amendment came about because Shaun and I, when we were looking to open this place, were looking in historic neighborhoods and we thought it would be fun to research some of the old San Francisco breweries,” Nico said. “We realized there was this culture of beer before Prohibition that made all these neighborhoods really vibrant. Then Prohibition wiped that entire culture out. So we came around to this idea that 21st Amendment allowed us to reclaim the essence of the neighborhood gathering place that had been lost. We felt that really captured the spirit of what we were trying to do.” 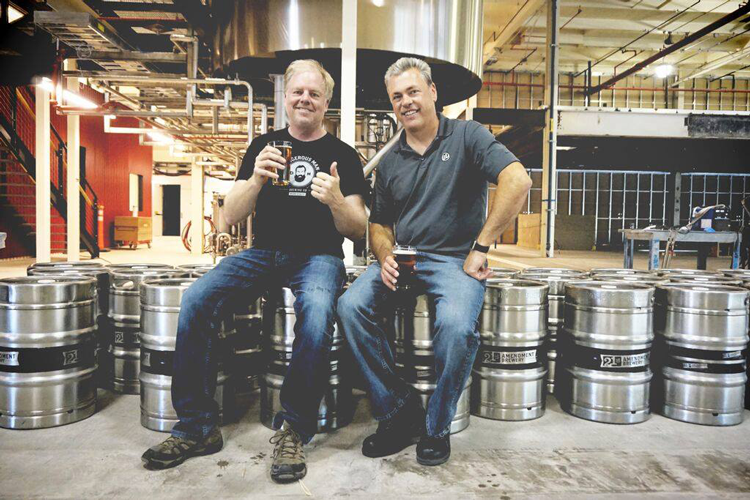 And the history doesn’t end there. According to Shaun, the building that now houses 21st Amendment Brewery was built in 1924. When they found it, the building was a warehouse. Now it’s a brewpub with innovative recipes both in the kitchen and in the brewhouse.

“Hell or High Watermelon Wheat Beer is an American-style wheat beer brewed with real watermelon juice,” said Shaun of their most popular beer. “Nico actually came up with the recipe way back in the day, and when we opened in 2000, he was all gung-ho about brewing that beer.” Though at the time Shaun didn’t think anyone would want to drink a beer made with watermelon, it has now become one of their most requested pints. 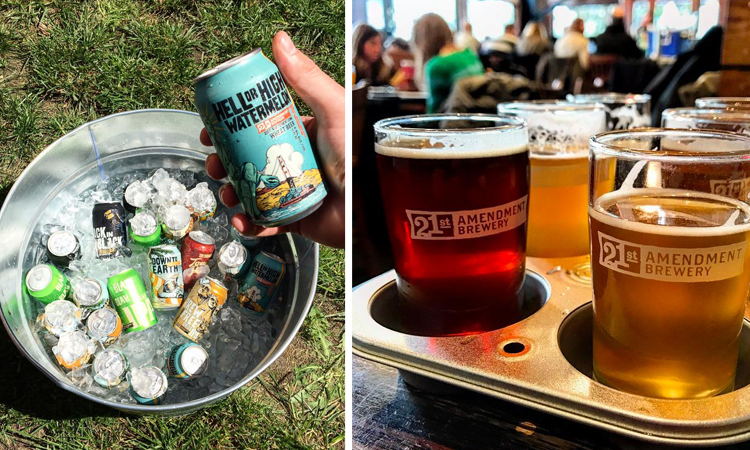 Today, head brewer Zambo has full run of the brewery with the freedom to be as creative and innovative as possible. “Zambo is like Spock,” said Shaun. His precision and methodical process yield good, clean, technical beers no matter what ingredients are inside.

Ultimately, at 21st Amendment, everything is all about fun and pushing the limits. And though you can find their beers in various places throughout the country, the SF staple is a must-see. Nico explained, “We always have eight or so different beers so you can always get things on tap here that you can’t get anywhere else.”

Let us know which Bay Area breweries and your favorites and share their interesting stories in the comments below!

September 27, 2019
Read Post
Fall is the Bay Area’s most exciting season. The end of summer brings some of the region’s warmest days, the annual grape harvest fills Napa and Sonoma counties with festive colors and plenty of wine, local botanical gardens are showing off their reds, oranges and golds, and our streets come alive with some of the year’s best festivals and events. This...