What To Do in Oakland if You Only Have 24 Hours

Like many locals in the Bay Area, we have a bit of a crush on the often underappreciated East Bay. Though the culture has been growing into its own over the past few decades, the last several years have shown a dramatic increase in craft breweries, foodie neighborhoods, family entertainment and local pride. And perhaps the proudest of the East Bay cities is San Francisco’s Brooklyn. That’s right; today, we’re spending 24 hours in Oakland!

As hip and cool as San Francisco is, Oakland is the more hipster of the two. There’s no reason to cross the bridge if you’re looking for trendy coffeehouses, sweet treats, foodie hotspots and outdoor adventure. Whether you’re a local or a visitor, get ready for a jam-packed day on the bright side of the Bay!

First on every agenda is caffeine, so let’s kick-start the morning with coffee from one of Oaktown’s finest!

Modern Coffee has two locations: one in Uptown and one Downtown. Built from a passion for coffee and tea, this stop is first on our list because they also showcase bakery items from Starter Bakery, Firebrand Artisan Breads and Rolling Sloane’s — also Oakland originals!

Open is a minimalist coffee shop in Downtown Oakland. With a warm, welcoming atmosphere, everyone will instantly feel at home and will probably want to stay to chat with the barista! Most people do. Check out the local art and the small shop in the back to take home a souvenir.

This chic cafe was named for its famed bike deliveries. With locations in Uptown and Jack London Square, you’ll be able to sip a sustainable coffee or tea, grab a pastry and hit the road. Though they now have locations in LA and Tokyo, they were born right here in the Bay!

If you stall for half an hour, you can pick up a craft espresso drink at Awaken Cafe Downtown. This hip spot is a live music venue, espresso bar, craft beer and wine bar, and organic restaurant all rolled into one. You probably won’t want much live music or craft beer at 7:30 in the morning, but take note and come back later during the weekend!

We’re headed outside for the rest of the morning, so you’re going to want to grab some sustenance at one of these local bakeries. Don’t forget to buy some extras so you can enjoy a taste of Oakland when you’re back home! 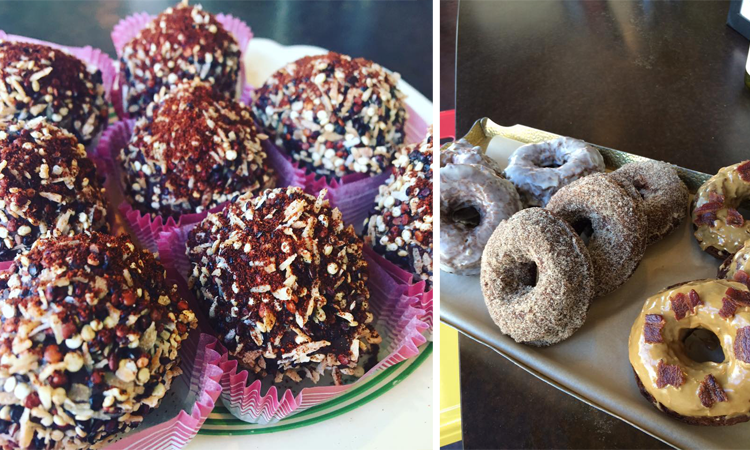 Sweet Bar is located in Uptown’s historic Packard Lofts building, once home to MacFarlane’s Candy and Ice Cream. Today, you can still get sweet treats, but with a few more gluten-free, vegan and organic options on the menu. In the morning, you can pick up a couple donuts, scones, croissants or a full plate of breakfast. And feel free to eat a morning cupcake!

La Farine has been a morning stop for Oakland locals since 1977. With some of the finest French pastries, fruit and nut tarts, classic cakes, cookies and rustic bread in town, they’re a must-taste before you head out of East Bay.

After coffee and a quick bite to eat, it’s time to opt outside. Head to Mount Diablo State Park with one of the best views in the Bay Area or go to nearby Tilden Regional Park just east of Berkeley. 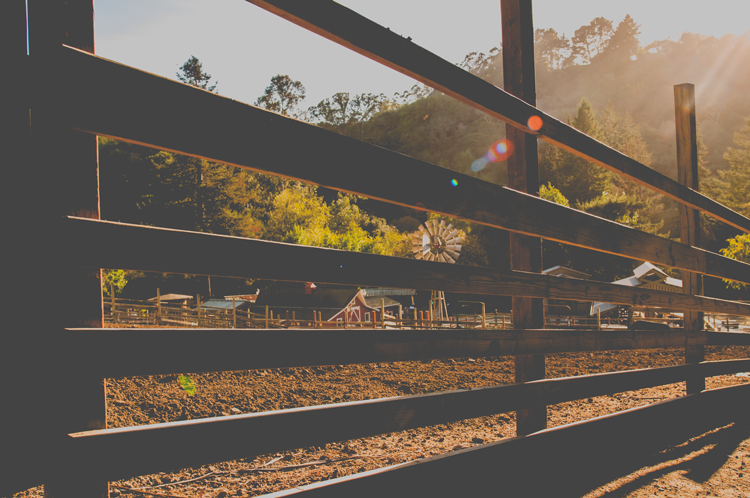 Mount Diablo offers some of the most popular hiking in East Bay and boasts the best view in the region — and that’s saying something. Because the peak is the only high point for miles, standing at 3,849 feet above sea level, you can see a panoramic view from the Golden Gate Bridge to the peaks of the Sierra Nevada across the central valley. The easiest, most accessible walk starts from the historic Summit Visitor Center and circles the peak at just under one mile. Follow signs for the Mary Bowerman Interpretive Trailhead to get started. More adventurous hikers can strike out on the 13-mile loop from the base to the summit. For this, you’ll start at the Mitchell Canyon Visitor Center and follow the Eagle Peak Loop Trail.

This park is operated by the East Bay Regional Park District and is one of the District’s three oldest. On the grounds, you’ll find a Botanic Garden, Environmental Education Center, Merry-Go-Round, Steam Train and Lake Anza, one of our favorite swimming holes in the Bay Area! Be sure to make a stop at The Little Farm, too. Built in 1955, the farm features a variety of farm animals including cows, sheep, goats, rabbits, chickens and pigs which you can feed if you bring your own lettuce and celery!

If roughing it isn’t your style, we can still get outside and spend some time with the wild animals at Oakland Zoo! Even before settling in Knowland Park, Oakland Zoo has been serving the community since 1922 through stewardship, inspiration and education. Today, you can see more than 660 native and exotic animals — including birds, amphibians, reptiles, arthropods and mammals! 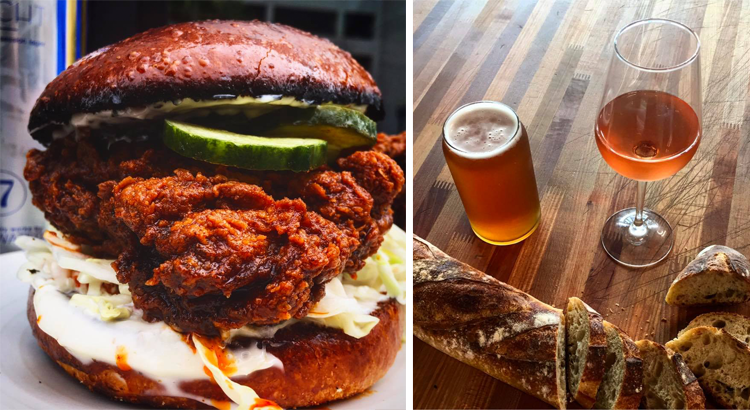 By the time afternoon rolls around, you’re going to want some sustenance — and we have just the place! Firebrand Artisan Breads started in 2008 as a wholesale business. With owner and baker Matt Kreutz at the helm, the bakery opened its first brick and mortar location right here in Oakland which began serving wine and beer in 2017. At 2343 Broadway, you’ll find the artisan bread we’ve come to love, in addition to a full-service eatery and retail space that features pastries, eclairs and other sweets.

But that’s not the only reason we’re stopping at Firebrand! In addition to private and group classes, the bakery offers a few public classes every month on topics like pretzel making, comprehensive bread baking and more. So schedule your class or book your spot for a public event and get ready to learn!

Oakland Museum celebrates every Friday night from 5 – 10 p.m. Friday Nights at Oakland Museum feature half price gallery admission for adults and free admission for kids 18 and younger. Inside and on the terrace, you’ll find a cash bar, Off the Grid food trucks, live music and dance lessons, hands-on art workshops, and the Marketplace at OMCA which features local makers selling artwork, handmade and handcrafted works.

If you didn’t eat too much at Oakland Museum, head out to one of Oakland’s best dinner spots!

In 2015, Shakewell was named the Best New Restaurant in Oakland Magazine’s Best of Oakland. Since then, they’ve been growing and impressing us even more. Chef Jen Biesty has trained in New York, Europe, San Francisco and now, with General Manager and Partner Tim Nugent, she’s designed a menu we want to taste every day of the week. Start with the Deviled Quail Eggs and you won’t be able to stop either!

In 1996, owners Rich and Rebekah Wood had their first date in Oakland’s Baywolf restaurant and they dreamed of one day owning a place exactly like it. Then in 2017, they opened the doors at The Wolf in the building that once housed their beloved Baywolf! Step inside to get a feel for locally sourced, French-forward California cuisine in a space built on passion and love.

Hopscotch describes itself as an upscale diner serving seasonally inspired cocktails and regional American food with a Japanese sensibility. Basically, that means you can get a bit of everything here — especially if you’re looking for creatively prepared, seasonal plates and cocktails you’ll fall in love with.

This fine dining restaurant is the only spot in the East Bay to boast a Michelin star — and it has two! We wouldn’t call the menu budget-friendly, but it’s definitely worth the money. Each dinner features eight immaculate courses for $149 and you can get beverages to match for an additional $80.

Still down to explore after dinner? Let’s head to one of Oakland’s innovative cocktail bars! 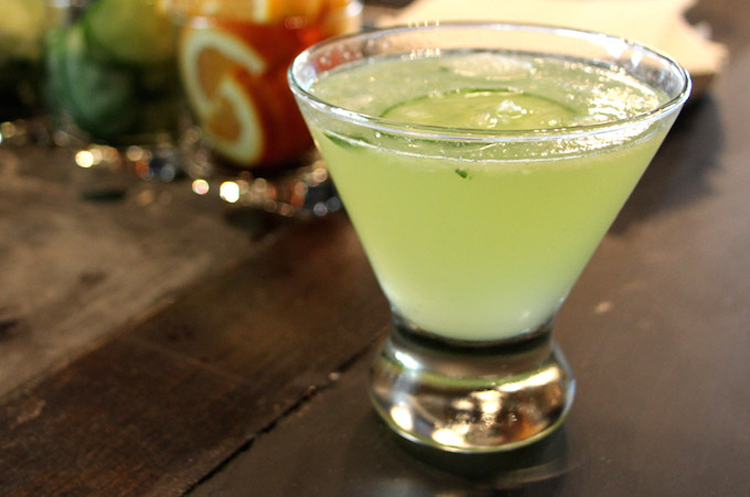 Located in Uptown, Make Westing is a cocktail bar with a few mouth-watering bites in case you get hungry. One look at the Hennessey BBQ Riblets and your stomach will probably start growling. While you’re sipping some of the most creative cocktails in town, hop on one of two indoor bocce ball courts or relax on the patio!

In Downtown Oakland, down the street from Oakland Museum, this celebrity-inspired spot serves innovative cocktails made with fresh, seasonal ingredients. No matter what season you stop by, there will be something on the menu to satisfy your craving. We love a La Kristita in the summer months, made with Hangar One Mandarin Blossom vodka, passion fruit, pear and lemon.

Both the food and drinks at Plum Bar are made and inspired by fresh, local and seasonal ingredients — intricately and uniquely prepared. As one of our favorite places to get a cocktail in the Bay Area, it’s a must-try! Check out their current menu sampling online and you won’t be able to resist.

At Mad Oak, they offer 40 beers on draft, craft cocktails made with seasonal ingredients, pop-up kitchens, and a rooftop deck. The friendly locale is filled with friendly faces, fun events and even movie nights on the outdoor patio!

There’s so much to do in Oakland, it’s tough to narrow down! If we missed your favorite destinations, let us know and we’ll start planning our second weekend on the bright side of the Bay.