Of all the reasons we’re lucky to live in San Francisco, the food is perhaps the most well-known. Or, at least, it’s the easiest to come up with — especially when our stomachs are growling. As lovers of design and home inspiration, we’re especially obsessed with those spots that can merge a well-crafted menu with a well-designed interior.

After all, we don’t go out to eat just for the food. The meal experience is about the atmosphere, the character and the community. Make your next foodie excursion unforgettable at a Bay Area destination that shows off all of the above — from farmhouse bistros to Parisian elegance. Each design is paired with a menu you’ll come back for again and again. 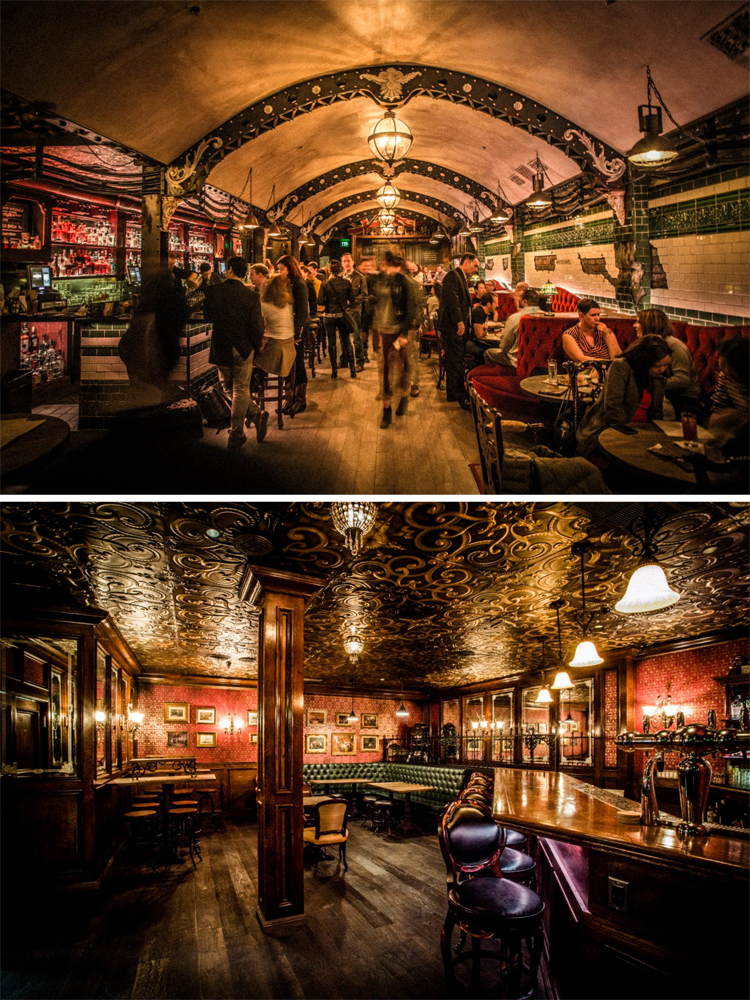 The Space | Inspired by London’s abandoned tube stations and the magic of old world gin culture, Whitechapel is an escape from the bustling SF streets above. Designed by Ignacio “Notch” Gonzalez of Top Notch Kustoms in San Jose, the interior merges Victorian decor and metallic industrial details with a sense of the underground — literally. As you sip your gin, your eyes will alight on a new statement piece every minute!

The Food | Whitechapel is a cocktail bar first, but the team doesn’t overlook the food — and you shouldn’t either. From the same people behind Smuggler’s Cove, Novela and other San Francisco favorites, you’re guaranteed a cocktail menu of concoctions you’ve never heard of and crafted comfort food meals you’ll crave. You can never go wrong with the Fish & Chips! 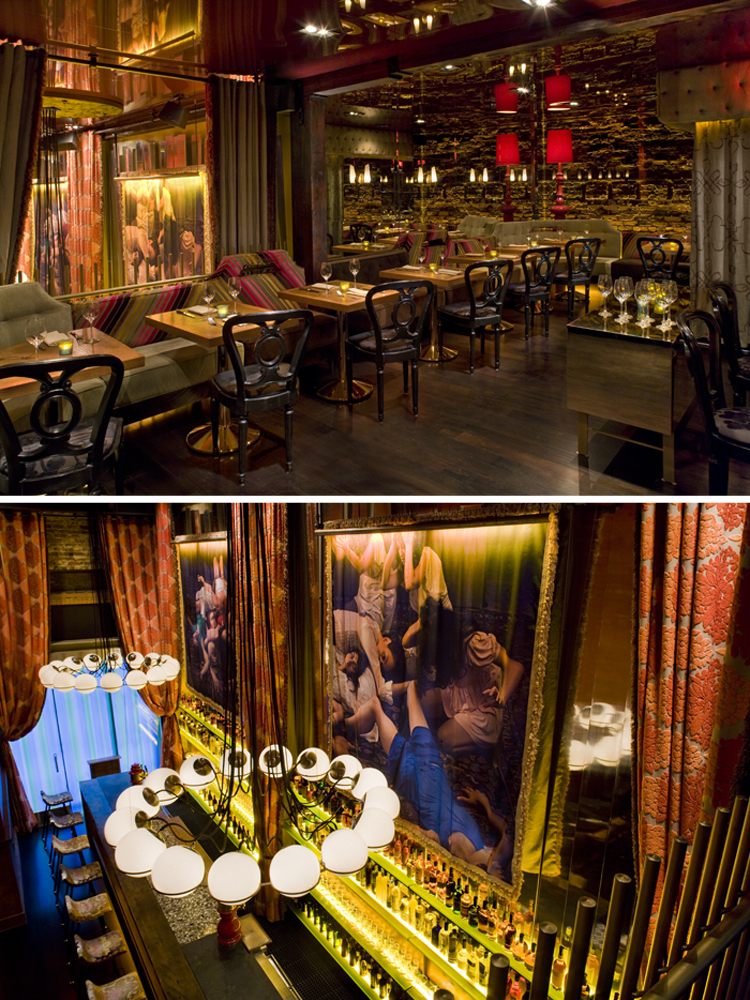 The Space | Gitane combines the playfulness of a 1930s cabaret with the audacious spirit of the 1970s. Designed by Mister Important Design, the restaurant features a bohemian collection of vintage lighting, fabrics and 20th-century glam. Dark and dramatic colors meet hundreds of statement lights and decor for a space filled with countless conversation starters.

The Food | The food is as inspired by Gypsy culture as the design. Rooted in Southern France with influences from Italy, Spain and the bounty of the Bay Area, you’ll find seafood dishes — including Wood-Fire Spanish Octopus and Red Trout Navarra — as well as inspired steakhouse meals. If you’re craving a steak, order the Grilled Bavette served with salsa verde, papas bravas, pimenton aïoli, and piquillo pepper espelette butter. 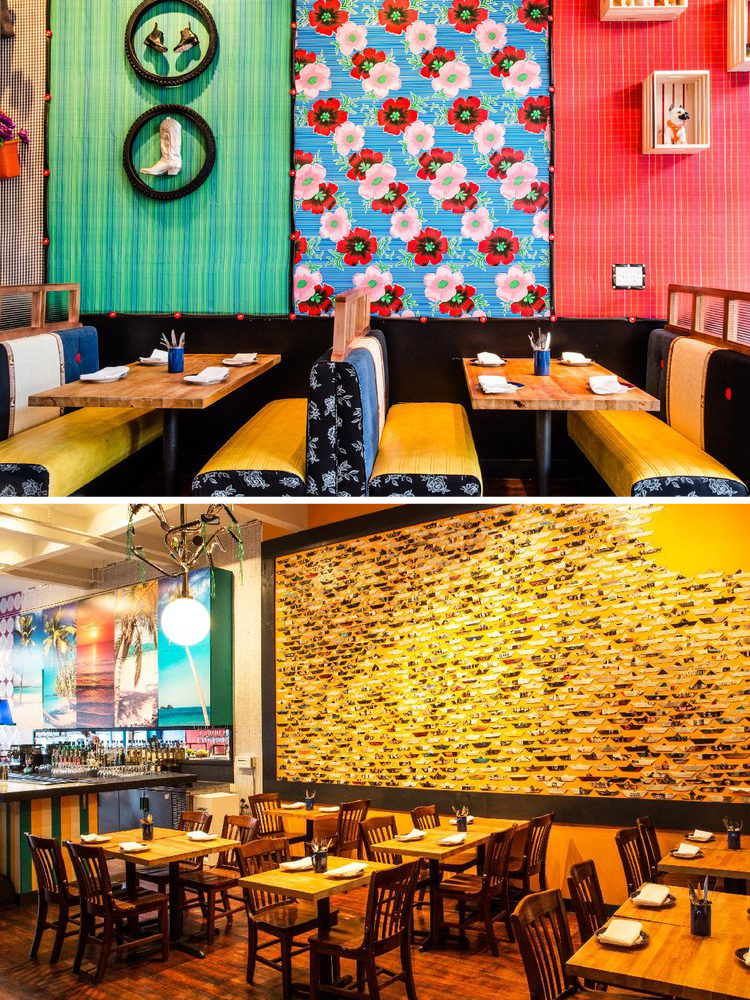 The Space | It’s no surprise to see Loló on a list of well-designed restaurants. When they moved to their bigger space in 2014, they designed an interior almost entirely decorated with Mission finds. Along with Gerardo Cendejas — chef, architect and jack of all trades — Jorge Martínez and Lorena Zertuche created a restaurant of genuine Jalisco origins complete with bold colors, vivid patterns and plenty of fun.

The Food | The team at Loló combines the rich traditions of Mexican heritage with Bay Area food culture and California ingredients. On the menu, you’ll find seasonal toasts like the Avocado and Smoked Trout Toast topped with capers, sun-dried tomato, arugula and Meyer lemon olive oil. But you’ll also find some of the city’s best tacos served inside hand-made flour tortillas! 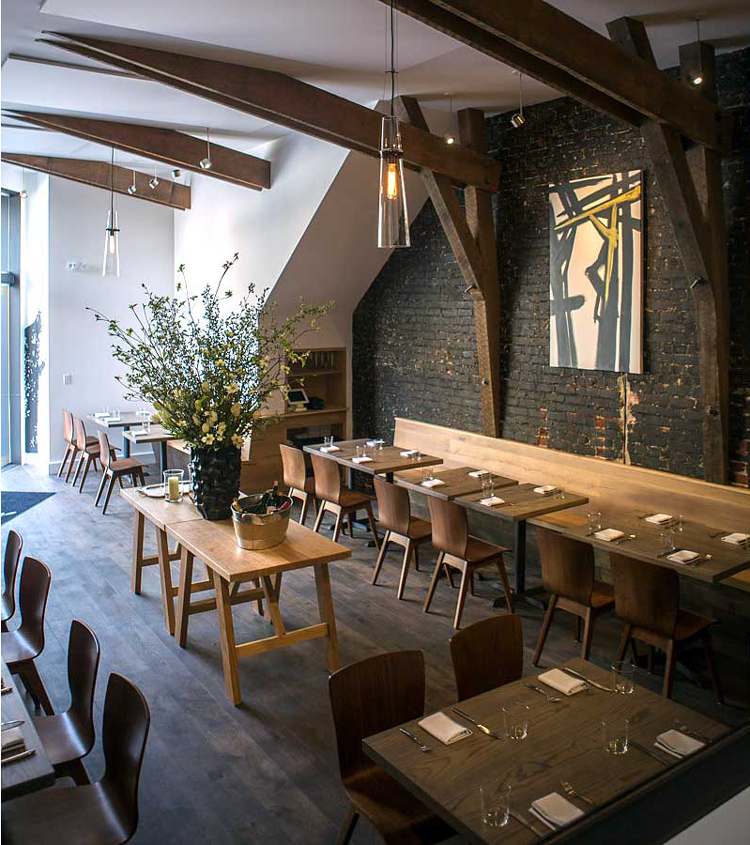 The Space | In just four months, Trestle’s interior was stripped and rebuilt with help from San Francisco-based Apparatus Architecture. Upon opening in 2015, the interior had been revamped as a tilted farmhouse — complete with the beams and brick we’ve come to expect from modern farmhouse decor. However, the design at Trestle takes classic details and makes them new — featuring smoky, black brick and disappearing supports.

The Food | Hi Neighbor, the group behind Stones Throw and Fat Angel, offers a new prix fixe meal at Trestle every night paired with the comfort and whimsy of a family gathering. Though the menu changes every night, you’re promised a simple and expertly prepared meal inspired by the basics of comfort cuisine. From the Roasted Corn Grits to the Coconut Custard — you’ll be planning your next dinner by the first bite. 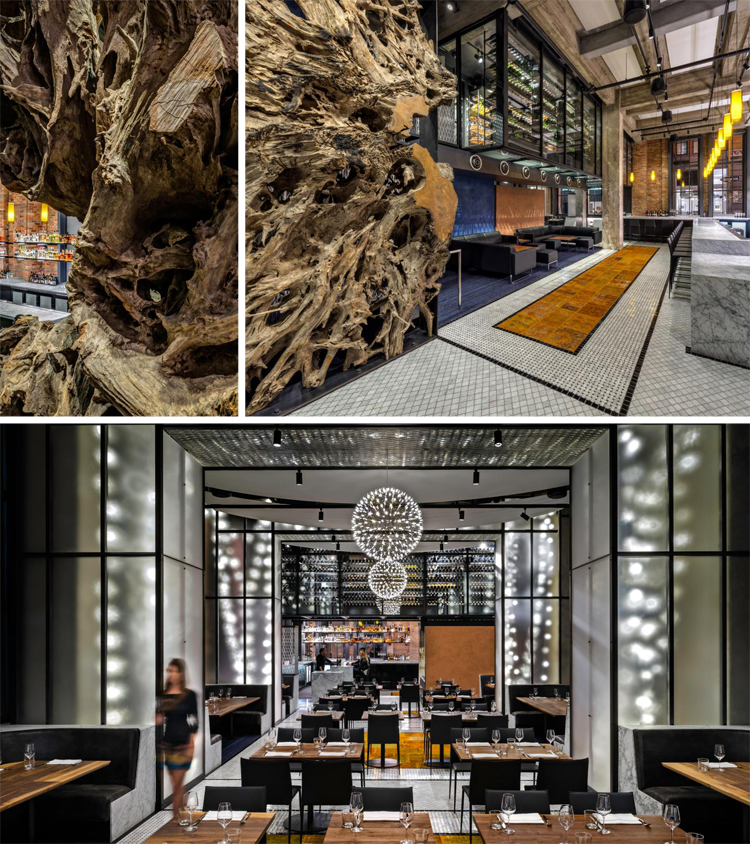 The Space | Designed by SF-based Lundberg Design, Mourad was inspired by traditional Moroccan design made modern. The decor mimics personal memories of Marrakech from both the designer and Chef Mourad Lahlou who grew up in the city. While staying true to the old 1920 Pacific Telephone tower, the team built a space that is inherently San Franciscan and boldly Moroccan — complete with stunning globe lights and a breathtaking root-ball sculpture.

The Food | Just like the design of the interior, the menu at Mourad is inspired by the flavors of Morocco. Using the fresh, local and artisanal ingredients we’ve come to expect in Northern California kitchens, Chef Mourad Lahlou creates lunch, dinner and tasting menus with flavors you won’t find anywhere else. Order a signature cocktail and take your time with the menu of fresh, innovative creations. 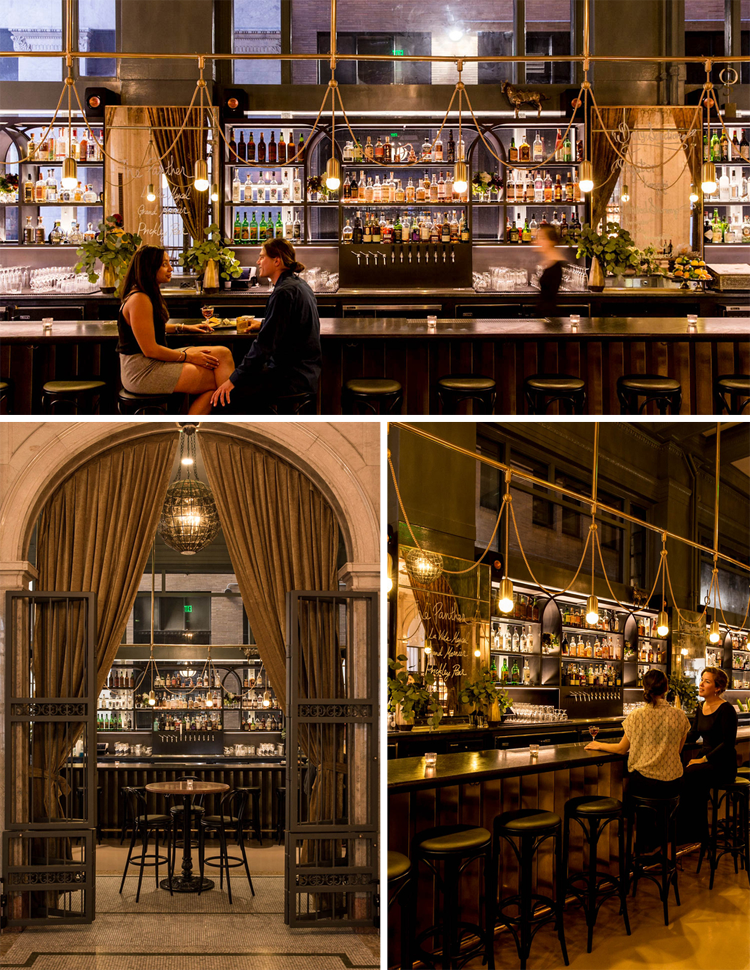 Photos courtesy of The Treasury

The Space | Located in a 1915 Beaux-Arts building, the historic atmosphere is ultimately what inspired the elegant design of this cocktail bar and lounge. Led by Lauren Geremia of Geremia Design, the timeless sophistication of velvet drapes, marble and mahogany meet the drama of jewelry-inspired lighting, stained glass globes and an ornate chandelier. All told, we’re left with a Victorian bistro atmosphere straight from the streets of Paris.

The Food | At The Treasury, you’ll find a cocktail list of inspired twists on old school favorites alongside a snack menu that may just fill you up. Start with the Walnut Stuffed Dates and the Pinkerton for something light. Made with George Dickel rye, Blenheim’s spicy ginger ale and bitters, the cocktail is as unforgettable as the decor. 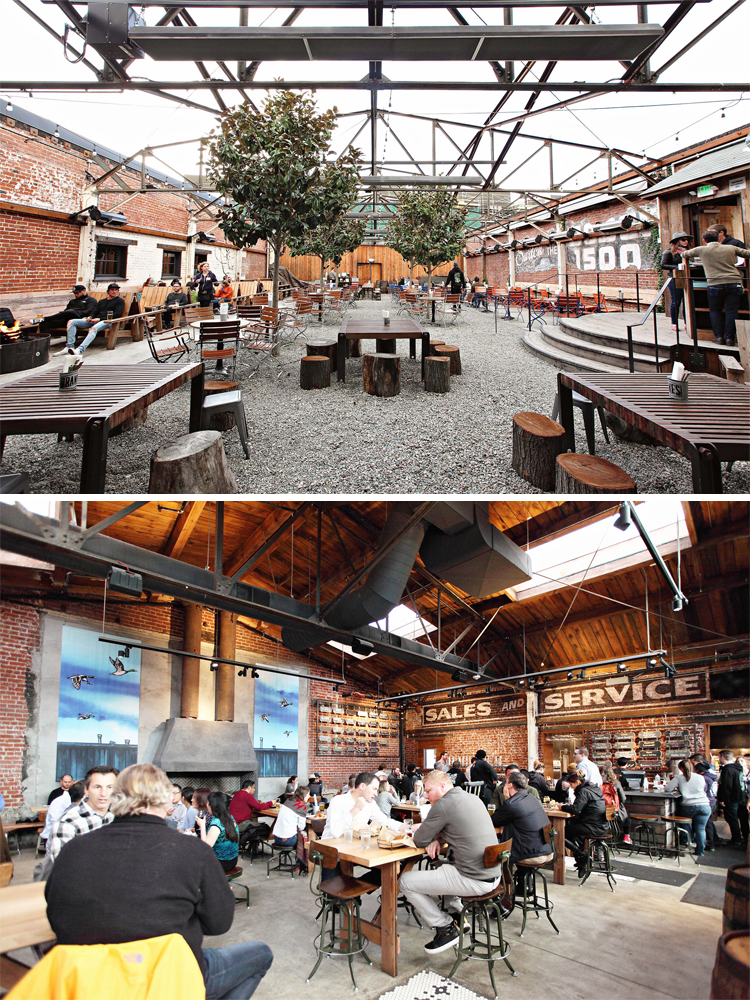 The Space | Across the Bay Bridge in Oakland, you’ll find a spot that merges East Bay casual with the trendy feel of the Bay Area and authentic German character. The team at Flynn Architecture used the shell of an old Dodge parts and service department and transformed it into an open-air beer garden. With a focus on openness and warmth, you’ll find cozy fire pits, historic red brick walls, industrial steel beams and an elevated ceiling so you can feel the open air even if you’re seated inside the beer hall.

The Food | The main attraction at Drake’s Dealership is the beer. Featuring selections from Drake’s Brewing Co., you’ll find a total of 32 beers on tap from across the region and throughout the world. But while you’re sipping under the stars in the open-air beer garden, be sure to order a wood-fired pizza! It wouldn’t be a Drake’s experience without tasting a fresh, sizzling pie.

Which San Francisco Bay Area restaurants and bars stand out to you? Let us know in the comments!

Blending indoor and outdoor living spaces is a classic move in California home design. That’s why we call California indoor/outdoor living iconic. Whether it’s an outdoor kitchen, a folding glass wall, or a simple, waterfront deck, these spaces provide easy access to the beautiful homes we live in and the jaw-dropping outdoors we’re surrounded by.  Using...

July 19, 2019
Read Post
The East Bay of the San Francisco Bay Area is home to some of our favorite communities, hidden gems, local businesses, outdoor attractions and iconic views. From the bustling cities of Oakland and Berkeley to more suburban locales like Piedmont and Hayward, the region offers a wide diversity of things to do and a huge list of amenities. Check out 10 of the Best...

6 Stunning Homes for Sale Right Now in the East Bay