After cooling down last quarter, Napa County rebounded with its best average sales price in market history. Reaching $994,214 this quarter, the average home in Napa County sold for 14 percent more than just a year ago, and 3 percent more than the previous benchmark set in Q1 2016. The effect of limited inventory is becoming more of an issue for Napa County, as the number of available homes for sale this quarter declined by about 6 percent year-over-year, placing an upward pressure on prices.

Napa County had a total of 249 homes sold this quarter, down 4 percent from Q1 2017 and 11 percent from Q4 2017. The average home went into contract after 87 DOM, moving 10 percent faster than the previous year. 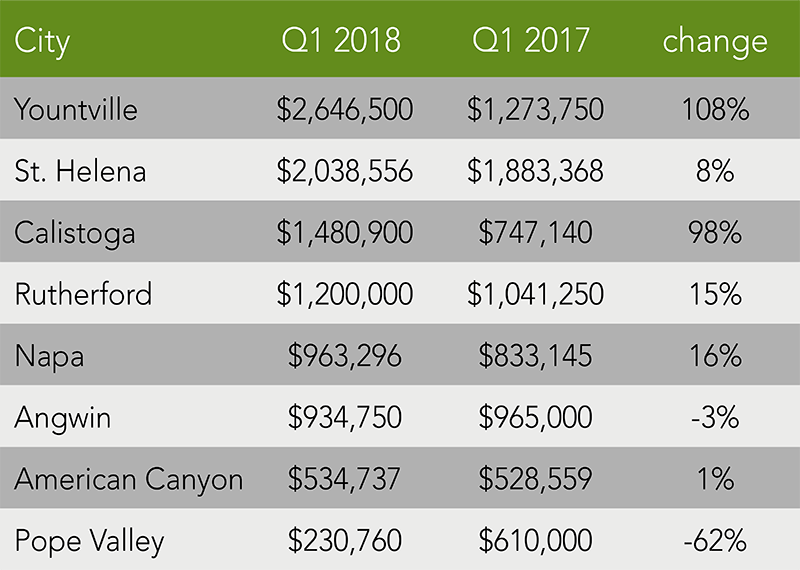 AVERAGE SALES PRICE BY CITY – THE TOP 10
The largest year-over-year price gains occurred in Yountville and Calistoga at 108 percent and 98 percent, respectively. A $12.21 million home sale in St. Helena was the county’s most expensive closing this quarter, driving the average up 8 percent to $2.038 million in Q1 2018.

SALES PRICE CHANGE
Sellers generally priced high or right on the money as properties that required no price change sold at list price. Those testing the market only took home 89 percent of their initial asking price.

The average home in Alameda County sold for $960,146 during the first quarter of this year. That figure resulted in a 9 percent rise year-over-year and was just 2 percent shy of the county’s 10-year record high that took place in Q2 2017. Alameda County had the second highest number of transactions in the Bay Area with a total of 1,785 homes sold this quarter,...

May 1, 2018
Read Post
The Bay Area’s housing market remained strong throughout all seven counties that we serve during the first quarter of the year. While each county had slight dips in sales volume from the previous quarter, the overall total number of homes sold for the collective Bay Area went up 3 percent year-over-year. Three of the four regions experienced significant...