The 13 Best Donuts in San Francisco

The world needs donuts, and San Francisco sure knows how to provide. Maybe it’s thanks to our city’s love of food, our creative character or our trend-setting nature, but whatever it is, there’s no doubting The City by the Bay has been the home of some of Instagram’s favorite pastry trends. Right now, we’re thinking of Tacros, Cruffins and donuts and big as your head.

Today, we rounded up a handful of the must-visit stops on any donut tour of San Francisco. This guide includes the tourist spots, the locals-only favorites, the long-standing staples and the newbies. So get your donut tasters ready, because you’re in for a treat (or a baker’s dozen). 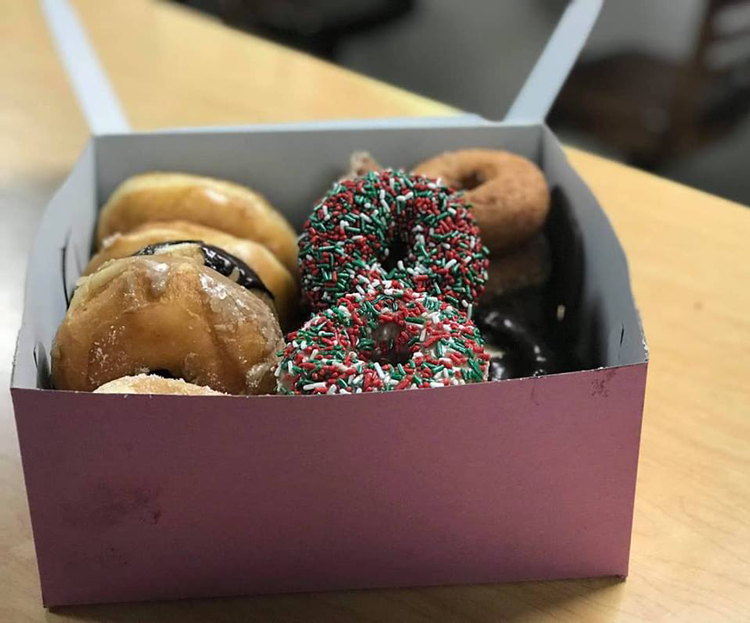 Bob’s Donuts has been a staple of the Nob Hill neighborhood since it opened in 1960. Today, the shop is still family-owned, they’re open 24 hours a day, and they’re one of the last independent donut shops making donuts and pastries from scratch. The Big Donut, their $10.95 gargantuan pastry has sparked the Bob’s Donut Challenge, which invites donut lovers to eat it alone in three minutes or less.

Butter Love Bakeshop and Pastry Chef Esa may be famous for pie—and rightly so—but this beloved bakery in Outer Richmond is also a go-to for donuts. Their scratch-made treats come in flavors like peanut butter and jelly, fruit-filled, Nutella-filled, strawberry sugar and more.

Pepples Donut Farm began in 2007 as a wholesale business serving the cafes of San Francisco, Oakland and Berkeley, then grew into a brick-and-mortar retail space in the Ferry Building Marketplace in 2010. Today, the team operates an Oakland cafe, a Los Angeles space, a Berkeley coffee bar and their original location in San Francisco. At all locations, you can taste their famous vegan and organic donuts. 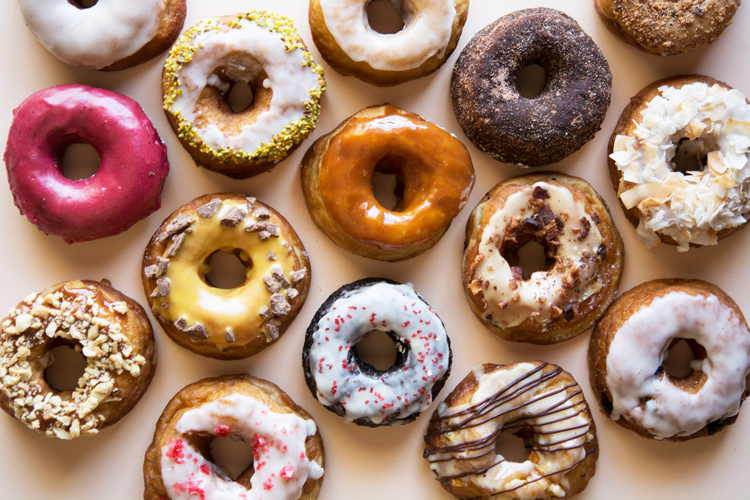 This San Francisco original is brought to us by Sara Spearin who earned her chops in kitchens like Foreign Cinema, Liberty Cafe, Stars and Postrio. Using seasonal, local and organic ingredients wherever possible, she and her team handcraft delicious, unique and Instagrammable donuts you’ll want to come back for every morning. The full Dynamo shop can be found in the Mission, but they also offer a Marina kiosk near The Presidio.

The team at Frena specializes in savory pastries baked in a brick oven, and those family recipes are more than 100 years old. Completely kosher, the menu also features handmade donuts packed with jam or Bavarian cream or served simply with sugar or cinnamon.

Grand Mission Donuts and Bakery has a cult following in San Francisco’s Mission District. The cash-only Chinese bakery offers a huge case of fresh buns, tarts, pastries, cakes and donuts, and its hidden behind an unassuming storefront on Mission Street.

Open from 6 a.m. until 10 p.m. every day of the week, The Jelly Donut is a favorite spot for many San Francisco locals. That’s because these are some of the softest and tastiest donuts in the city, and those treats are paired with some of the kindest service, too! Stop in next time you need a treat, remember to bring cash, and be ready to go back soon, because this shop serves a lot of return customers and regulars. 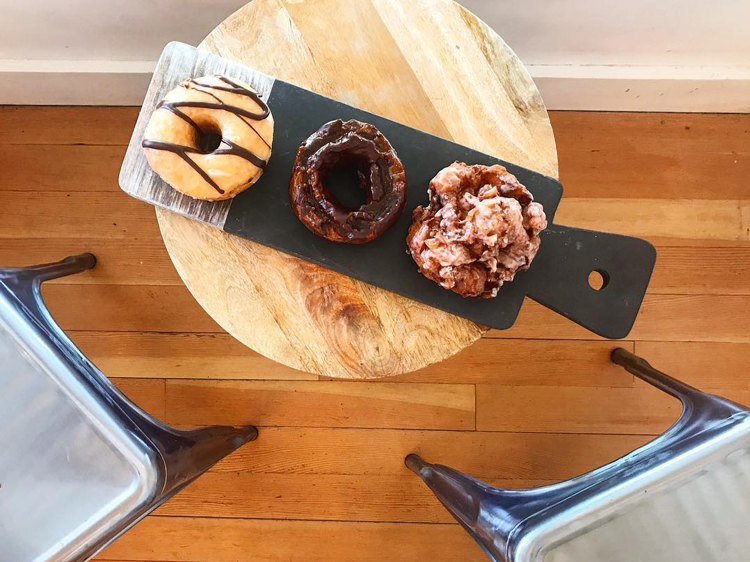 From two Bay Area locations and a stylish food truck, the Johnny Doughnuts team serves handcrafted, uncomplicated donuts that are inspired by the seasons and made with local ingredients. Served alongside locally roasted coffee, you can enjoy raised donuts, old-fashioned donuts, caramel apple fritters, vegan raised donuts, and Bismarks (otherwise known as the Holy Grail of filled doughnuts) filled with homemade jams and custards. They also serve The Fritter Thang, which is a wheat-free donut and the Crodough, which combines everything we love about croissants and donuts. 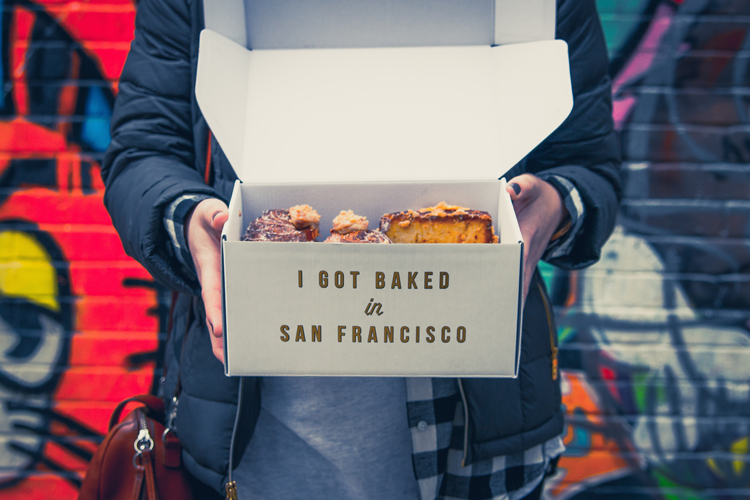 Mr. Holmes Bakehouse is a Los Angeles original that found a second home here in San Francisco. Famous for their Instagram-worthy shop and their Instagram-worthy treats, their menu features the famous Cruffin, matcha-dipped croissants, seasonal fruit tarts and beautifully filled donuts. Seriously, they’re the most beautiful donuts we’ve ever seen.

Trish’s Mini Donuts is on every list of San Francisco’s best donuts because they really do serve some of the city’s best donuts. And you can buy them by the bag, the bucket or the bathtub! Operating for more than 23 years, Founder Trish Conklin now owns and manages six different food retail businesses in the Bay Area and Los Angeles. Be sure to pick up your bucket of donuts next time you’re at PIER 39. 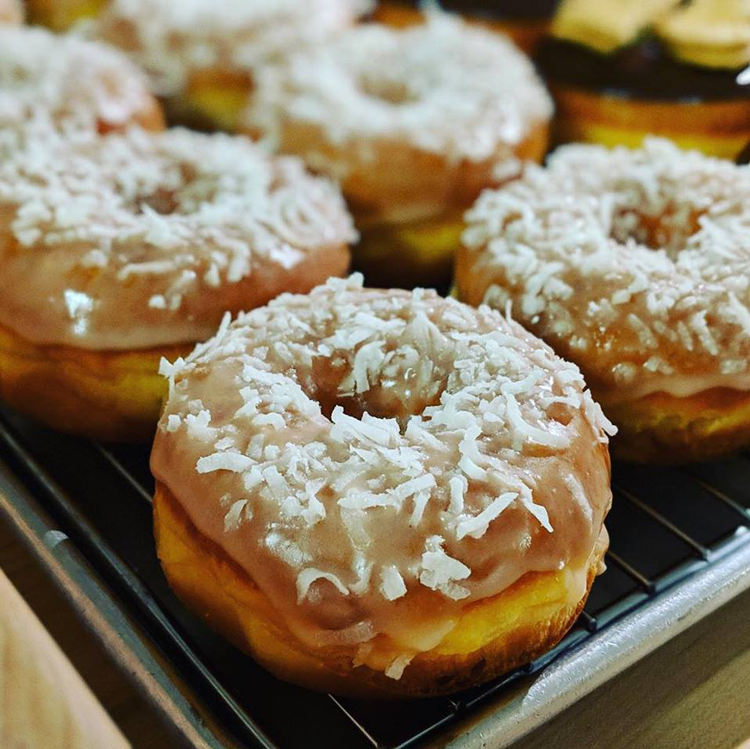 Joyce and Paul Lim are the husband and wife team behind Twisted Donuts and Coffee, which opened in the Sunset District in 2014. During the week, they serve up some of San Francisco’s best classic donuts, and on weekends their menu gets twisted with sweet and crazy specials like Baconpeño, S’mores Galore, That Ube Donut, Matcha Bar, Coconut Guava and more. To find out what’s available this weekend, follow the team on Facebook here.

Offering some of the biggest and best donuts in the city isn’t an easy feat, but at Uncle Benny’s they do it even better because they make all their donuts fresh using organic ingredients and fry them in palm oil. Their gargantuan menu features 38 rotating flavors of donuts, 31 types of bagel sandwiches, 13 different types of cream cheese and more than 10 different kinds of coffee so you can always find your perfect pairing.

Do you have a favorite San Francisco donut?

Tell us about it in the comments below!