Your Self-Guided Tour of the Mission District, Mapped

Undoubtedly one of San Francisco’s most famous neighborhoods, the Mission District is a culmination of history, culture, art, food and entertainment. It gets its name from the Mission Dolores, the city’s first designated landmark and the oldest surviving structure in San Francisco. From that date of construction—1776—through decades of history, the Mission thrives today as a center for art, expression and tons of fun.

This self-guided walking tour explores all of that and more, from freshly roasted coffee through wide open community spaces to historic structures then past walls of murals and into some of the best cocktail bars, breweries and eateries in the city. Enjoy!

Linea Caffe is not only one of the best coffee shops in San Francisco, it’s also where we’re starting our tour. Linea was featured in The Bay Area’s 13 Best Artisan Coffee Roasters. That’s likely because Master Roaster Andrew Barnett approaches coffee like fine wine and chocolate. According to him, the perfect cup should be naturally sweet, balanced, complex and elegant — and he and his team strive to produce the perfect cup from every single bean.

Featured in The 13 Best Donuts in San Francisco, Grand Mission has a cult following in the city. The cash-only Chinese bakery offers a huge case of fresh buns, tarts, pastries, cakes and donuts, and it’s hidden behind an unassuming storefront on Mission Street. There’ll be a line, but the wait is worth it for a delicious, on-the-go breakfast!

One of the most visited alleys in the city, Clarion Alley runs for one block between 17th and 18th and Mission and Valencia Streets in the Inner Mission. Inspired by Balmy Alley—another mural arts alley that began in the ‘70s and focused on Central American social struggles—a group of six artists established this second alley with similar goals focused on social inclusiveness and aesthetic variety. Over the years, they have supported artists of all ethnicities, ages and levels of experience. It’s a must-see during any trip to the city. To learn more about the art and organization, check out the Clarion Alley Mural Project online here.

Inside The Women’s Building, you’ll find a women-led non-profit community center dedicated to helping everyone find confidence, strength and the tools needed to create better lives for themselves, their family and their community. Outside, the building is covered in one of San Francisco’s largest and best-known murals, MaestraPeace. The public art piece was originally painted in 1994 and is a visual testament to the courageous contributions of women through time and around the world.

Tartine makes an appearance on every list of the city’s best and most well-known bakeries, and this national renown has made it a true San Francisco classic. In 2008, chefs Chad Robertson and Elisabeth Prueitt even brought home the James Beard Award for Outstanding Pastry Chef! Today, the team has expanded their empire to include three SF locations (including the extremely popular Tartine Manufactory on the opposite side of the Mission), one in Los Angeles and three outposts in Seoul. At this bakery, we’re stopping for fresh croissants, sweet pastries and a café menu. 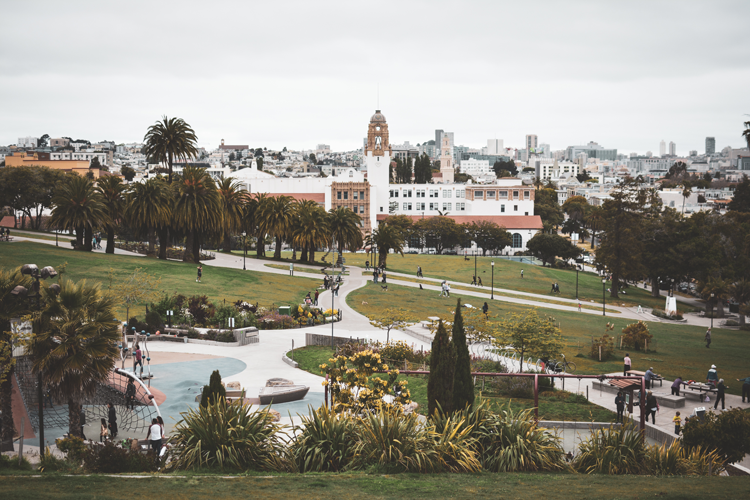 The 16-acre Mission Dolores Park is one of the city’s most popular parks. In addition to hosting the occasional festival, concert or cultural event, it offers year-round access to open lawns, six tennis courts, a basketball court, a playground, two off-leash dog areas, a multi-use court and more. It’s the perfect place to people watch and take in the sights and culture of the neighborhood! 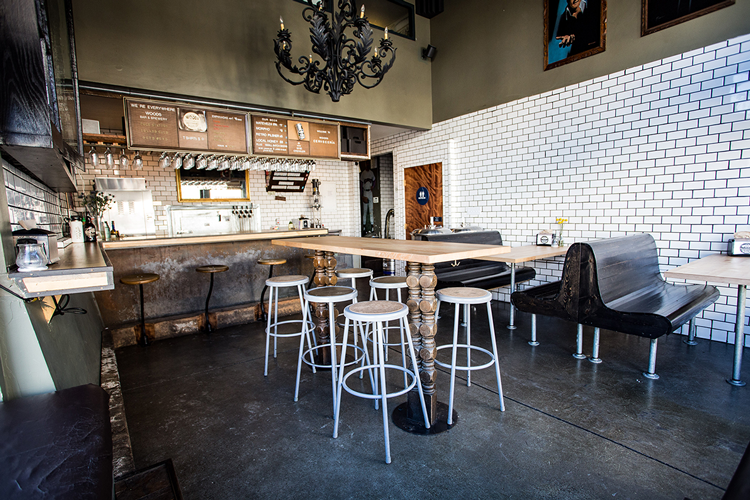 Woods Beer Co. is now a famous Bay Area brewery with four locations in the city and one in Oakland, but their story started right here in the Mission District at Woods Cervecería. The small, experimental brewery is styled after a rustic, Argentine estancia and serves up empanadas alongside some of the team’s most innovative brews.

This building was the first ever designated landmark in the city and is the oldest landmark on our guide, The 25 Essential Historic Landmarks Around San Francisco, Mapped. Originally founded on October 9, 1776, the church is also the oldest surviving structure in San Francisco, representing the sixth religious settlement established as part of the Spanish missions in California. For more information on church events, click here.

The Roxie is a nonprofit theater and a landmark of the Mission. Beyond just showing movies, they invite filmmakers, curators, entertainers and educators to interact with audiences post-credits and for special events. Moviegoers have two cinema choices, the 49-seat Little Roxie and the 234-seat Big Roxie, which is one of the oldest continually run cinemas in the world. To see what’s playing, click here.

Dandelion Chocolate is a bean-to-bar chocolate factory headquartered in the Mission. In the factory, the team roasts, cracks, sorts, winnows, grinds and tempers small batches of beans then molds and packages each bar by hand. And you can see it all because the factory and café is open to the public seven days a week! Special experiences include classes, special public and private events, destination trips to cacao farms across the globe, and one-hour factory and tasting tours, which we definitely recommend stopping for.

This shop is San Francisco’s only pirate supply store and proceeds benefit the work of 826 Valencia, a local nonprofit dedicated to supporting under-resourced students with their writing skills and creativity. The store itself is filled with artifacts, educational materials and tools, including things like temporary tattoos, messages in bottles, sea salt and sea pepper, scurvy cures and more.

Dog Eared Books opened in 1992 and now offers two locations in San Francisco. As a general interest store, they offer a little of everything, but as an indie bookstore, they also specialize in off-beat, small press and local literature. Amongst the books, you’ll also find plenty of magazines and, if you look up, you can find artwork available for purchase, too. To learn more, check out The 15 Best Independent Bookstores of San Francisco, Mapped. 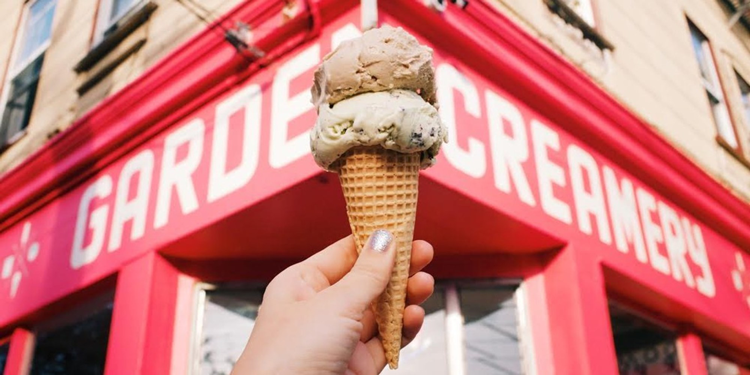 The small, family team at Garden Creamery handpicks seasonal produce and herbs from local farms to create their flavors, sources tea from select family farms in Japan and other parts of Asia, and uses grass-fed, organic dairy from local Petaluma family farms to blend it all together. In the shop, you can taste flavors that have been crafted and slow-churned from scratch. 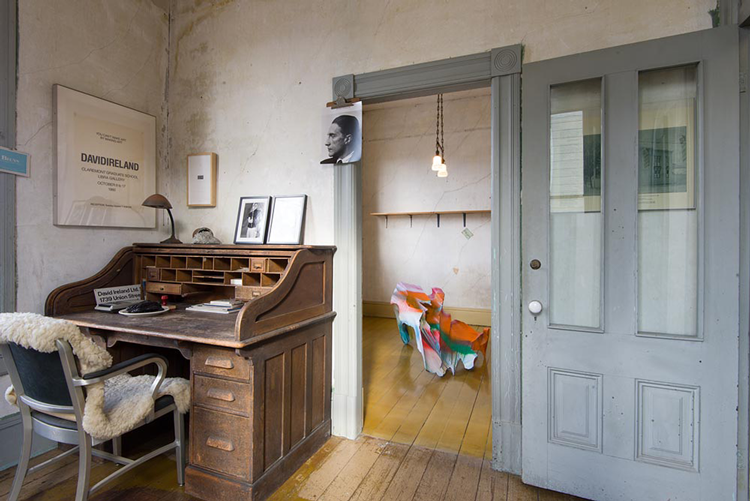 Installation view of Amulet or He calls it chaos, 2019; Photo: Preston/Kalogiros; Courtesy of The 500 Capp Street Foundation.

Curated and maintained by the 500 Capp Street Foundation, The David Ireland House is the centerpiece of Ireland’s prolific career and, today, is an immersive art experience. David Ireland was a sculptor, conceptual artist and architect who created works that combined sculpture, architecture, painting and even performance. He lived and created at 500 Capp Street for 30 years, transforming it into an art piece in its own right. Today, you can take artist-guided tours on Wednesdays, Thursdays and Fridays or enjoy self-guided tours on Saturdays. For full tour information and tickets, click here.

Led by Executive Chef Thomas McNaughton, flour + water is one of the city’s most popular dinner destinations. The team offers a menu influenced by Italian traditions and Northern Californian inspirations—and many of those California inspirations are driven by local produce. Because they source from nearby farms and purveyors, their menus change daily, but you can always count on Neapolitan-style pizzas, handmade pastas, and upscale but approachable dishes.

Featured in The San Francisco Cocktail Bar Bucket List and housed inside a converted warehouse, Trick Dog is an unpretentious cocktail bar with world-class beverages. In fact, their menus have snagged the Tales of the Cocktail Spirited award for the world’s best—and it’s not just because of the drinks! Every six months, the team releases a new menu and each time it looks like anything but a cocktail menu. Past examples include a kid’s book called What Rhymes with Trick Dog?, paint swatch books, and Chinese restaurant menus.

Southern Pacific Brewing pays homage to its neighborhood and hometown roots through its name, its warehouse space, its handcrafted food and its true-to-style beers. With both an upper mezzanine and an outdoor patio, the brewery itself is as welcoming as the food and drink. So grab a seat inside or out, order up your Brass Hat Burger with a craft beer, and get ready to settle into your new favorite San Francisco brewpub.

There’s so much to see in the Mission, we weren’t able to include everything we love about the neighborhood. Which businesses, attractions or sights would you add? Tell us in the comments below!