The history of books and literature in San Francisco—and in the greater Bay Area—is spotted with the likes of Jack Kerouac, Jack London and Mark Twain alongside local celebrities like Lawrence Ferlinghetti and Armistead Maupin. Through the decades, our city has acquired legends, landmarks, bookstores and programs every book lover can appreciate. In this guide, we rounded these up for an epic book lover’s guide to San Francisco and the Bay Area.

As a famous literary city, San Francisco is home to countless small neighborhood shops, several famous bookstores and even specialty stores for cookbooks, special topics and more. To learn about a handful of the largest indie stores, keep reading. To track down even more, check out The 15 Best Independent Bookstores of San Francisco, Mapped. 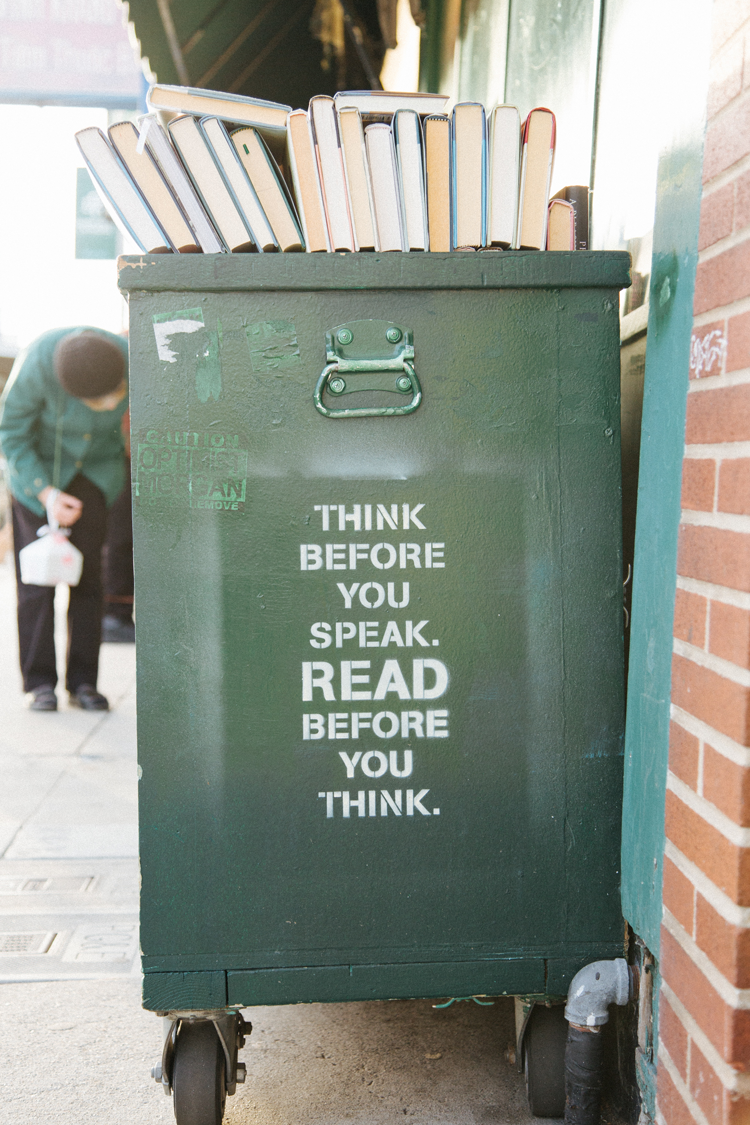 Richard Savoy was 25-years-old when he founded Green Apple Books in 1967. When that first shop opened on Clement Street, it covered just 750-square-feet—but today the team has 8,000-square-feet and multiple floors at their first location and an entirely different shop, Green Apple Books on the Park, in the Inner Sunset neighborhood. Through both stores and over half a century in the city, the entire team has become an integral part of the local business community through both community and philanthropic endeavors. To learn more, click here.

Founded in 1953 by poet Lawrence Ferlinghetti and Peter D. Martin, City Lights is a landmark independent bookstore and publisher—and is quite possibly San Francisco’s most famous. As a literary meeting place both then and now, it served as the city’s hub for Beatnik literature and has continued its legacy of community, independence and voice throughout the years. With books on all three floors, you can find selections from the world’s largest publishers alongside titles from the smaller, specialty businesses.

Anton Roman began selling books in 1851, but his legendary bookstore didn’t become Books Inc. until 1946. From then on, their history has been defined by their indie character as they fought and survived the expansion of huge national book companies. Today, they operate 11 stores in San Francisco, East Bay and the Peninsula, and have become the West’s oldest independent bookseller.

Dedicated to the residents of our communities, the library programs of San Francisco and the wider Bay Area serve as institutions for education, accessibility, research and more. Within the city alone, the San Francisco Public Library provides more than 25 branches and there are even more resources in communities outside the city. Keep reading to learn about a few of those.

Available to all residents and visitors of the City and County of San Francisco, the San Francisco Public Library serves to provide free and equal access to information, knowledge and independent learning to all members of our community. They operate more than 25 branches throughout the city in addition to five bookmobile programs!

Just north of the city, Marin County operates an outstanding library program that is now entirely free as they charge no late fees. Their story starts in 1927 in the basement of the old Marin County Courthouse in San Rafael, and today the Marin County Free Library has grown to a network of 10 branches and a Bookmobile.

In the East Bay, the Oakland Public Library system is also fine free! What began all the way back in 1878 has grown to 16 branches, a Main Library, a Second Start Adult Literacy Program, the Oakland Tool Lending Library, the African-American Museum and Library at Oakland, and several other special services for residents.

Our communities are home to countless nonprofit organizations assisting every family, child and person living here. Below, you’ll find a handful that are focused on book arts, literacy and youth education. Then, you can find more local charities in our guide 27 Outstanding Local Charities in the San Francisco Bay Area + How You Can Help.

Founded in 1996 in San Francisco, this nonprofit organization combats illiteracy by inspiring youth in our communities to use their voices and express themselves through writing, spoken word and more. Among other programs and events, Youth Speaks produces local and national youth poetry slams, festivals and reading series. To find out when you can attend a local event, click here.

At 826 Valencia, they work to support under-resourced students with writing skills of all kinds and to help teachers inspire their students to write. The organization was co-founded in 2002 by Bay Area author Dave Eggers and educator Nínive Calegari. Today, the team works to close the academic achievement gap for underserved youth in the Bay Area, provide the tools and resources necessary for success, connect caring adults to young people, and make the path to college and career a shorter leap. They do this through a range of free programs for local students, classrooms and schools with a focus on projects and expressing creativity. The easiest way to support their work is to visit their famous Pirate Supply Store which you can see online here.

Children’s Book Project has been serving children in the Bay Area since 1992. Their programs help children learn to read by providing free books and other resources to kids and to shelters, schools, daycares and community centers so these children can read and be read to. They collect new and gently used books for children of all ages, sort the books according to subject matter and reading level, then teachers, caseworkers and other community workers come to the book site and select the books they need for the children they serve. To find out how you can help, click here.

The Book Club of California

Originally founded in 1912, The Book Club of California is a San Francisco-based nonprofit that supports bookmaking, fine printing, design, typography, illustration, literature and scholarship through a series of publications, public programs and exhibitions which connect our community to the history and literature of California and the West. Headquartered just blocks from Union Square, you’re invited to visit and explore comfortable clubrooms, the gallery space and their special collections library. To learn more, click here.

The San Francisco Center for the Book

Featuring and focusing on the art and craft of letterpress printing, bookbinding and bookmaking, The San Francisco Center for the Book is a nonprofit dedicated to the art of the book. Their team provides a home for Bay Area book artists and a place where the wider community can discover book arts—covering the history, artistry and the book’s enduring importance as a medium of self-expression in our culture. Their programs include free opening receptions for gallery exhibitions, book release parties, gallery talks, tours, open houses, mixers and other community events.

Held in San Francisco and other Bay Area communities, our local organizations host some outstanding book-themed events throughout the year. Read up on them here and mark your calendars! 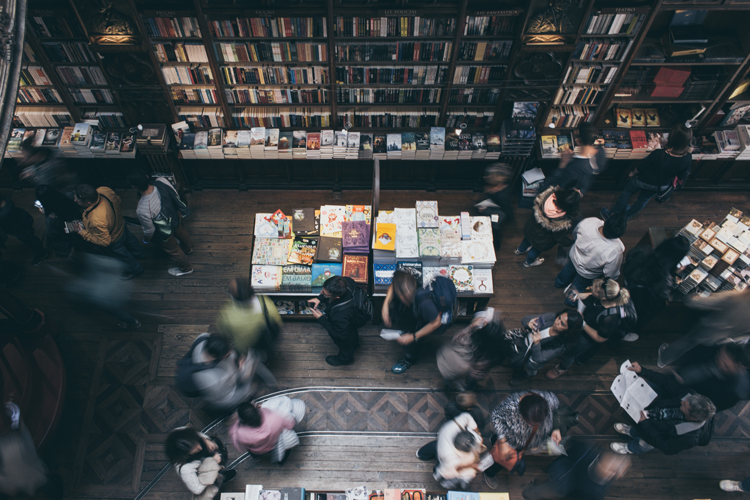 Held in downtown Berkeley as one of the premier literary events in the nation, the Bay Area Book Festival brings together tens of thousands of book lovers and hundreds of acclaimed authors for an entire weekend of programming. This mission began in 2015 with the goal of creating a free, inclusive, world-class literary event right here in the Bay Area. Since then, the festival has hosted more than 1,000 speakers for nearly 400 sessions. For information on the next event, click here.

The original Litstock debuted as a free, one-day reading series in Golden Gate Park in 1999. Today, it has grown into Litquake, a ten-day festival of diverse literary programming that includes interactive workshops, readings inside spectacular venues, author discussions, and the closing night Lit Crawl through the Mission District. Some events are free and some come with an admission fee, but you can find all the information on the Litquake website here.

Completely free and open to the public, the San Francisco Art Book Fair showcases artists’ books, art catalogs, monographs, periodicals, zines, printed ephemera and artists’ multiples for a multi-day festival in celebration of artistic publications. In 2018, the event welcomed 120 exhibitors and more than 10,000 visitors at Minnesota Street Project. For information on the next event, click here.

The entire Bay Area is home to more than a century of literary history. Through the decades, we’ve accumulated countless landmarks—from unassuming plaques to independent bookstores to huge state parks. To get a sampling of all the above, keep reading!

The Beats, as in beaten down and beatific, were a collective of writers, artists and thinkers that congregated in 1950s San Francisco. As examples, think of Jack Kerouac, Allen Ginsberg and Neal Cassady. Inside the independently owned museum, you’ll find Beat memorabilia, including original manuscripts and first editions, letters, personal effects and cultural artifacts. To learn more and find out how you can help support the museum, check out the website here.

Jack Kerouac Alley is a short, 60-foot alley that connects Chinatown and North Beach. Located at the heart of all San Francisco’s Beatnik legends, the alley is named after Jack Kerouac who frequented both City Lights and the storied Vesuvio Café. When you travel the alley today, you can still step inside City Lights and Vesuvio while enjoying the murals, decorative lamp posts and poetry inscribed on the walkway.

Located across the Bay Bridge in Oakland’s Jack London Square, Jack London’s Cabin is one of two replicas constructed using logs from Jack London’s original cabin. That first cabin was built just before the 1898 Gold Rush on the North Fork of Henderson Creek south of Dawson City. Abandoned for years after the Gold Rush, trappers found London’s signature on the wall and in 1965 that cabin was dismantled. Using the original logs, replicas were constructed in Dawson City and right here in Oakland. When you visit, be sure to stop in Heinold’s First and Last Chance Saloon, a saloon built in 1880 and frequented by Jack London himself.

In Chinatown’s Portsmouth Square, you’ll find San Francisco’s Robert Louis Stevenson memorial. Though the poet was born in Scotland and traveled the world, he spent time living in San Francisco in the late 1870s with the woman he loved. Across from the square at 19 Walter U Lum Place, you can also track down an unassuming plaque commemorating the location of San Francisco’s first bookstore which was opened by John Hamilton Still in 1849.

Just over an hour north of San Francisco, Jack London State Historic Park is a historic and natural gem of Sonoma County. The vast park is home to Jack London’s gravesite, The Beauty Ranch where Jack London experimented with groundbreaking methods of farming and more humane ways of raising livestock, the Londons’ principal home built in the 1860s, the unfinished Wolf House, and several other historic sites, trails and facilities.

Do you have a tip for local book lovers?