Downtown Oakland is a neighborhood that is proud of its roots, celebrates its diversity, shows off its history, and supports local on every single block. The neighborhood consists of the picturesque Lake Merritt, charming Old Oakland, hip Uptown, bustling Jack London Square and the heart of it all: Broadway.

This self-guided tour explores all of those areas and even circles Lake Merritt, adding a lovely and iconic 3.1-mile walk to the itinerary. Along the way, we’ll explore history and food, landmarks and local businesses, new additions and old mainstays, coffee, donuts, Japanese cuisine and waterfront views. 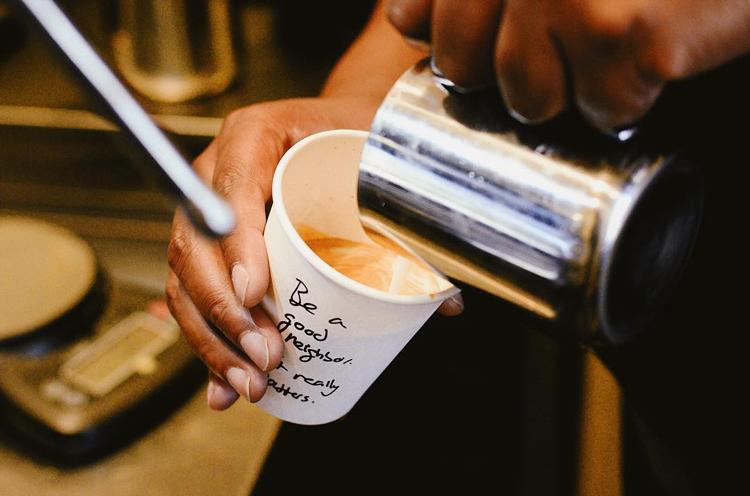 The small, local team at Slojoy is as serious about spreading joy as they are about roasting and brewing great coffee. Their walk-up window is located in the heart of Downtown Oakland and is the perfect start to our tour. Every cup comes with a handwritten message of hope and joy and you can even purchase the Cup of Joy to write your own message and spread the wealth. To learn more about Slojoy, check out Meet the Team Behind Slojoy Coffee Roasters in Oakland.

Often heralded as the best donuts in East Bay, Donut Savant is a cozy little shop open Tuesday through Sunday, and if you’re craving a sweet breakfast, it’s the perfect place to stop. Their menu features tons of flavors of donut holes for bite-sized treats alongside huge, sugary fritters, bars and cron’ts, which blend the best of a donut and a croissant.

When the Paramount Theatre was built in 1931, it was the largest multi-purpose theater on the West Coast. Today, it seats 3,040 guests and is still a beautiful, Art Deco concert hall, event and performance venue located in the heart of the city. Their calendar features everything from symphony and stand-up to ballet and Broadway shows. To see what’s coming up, click here.

Located on the northern edge of Downtown Oakland in Uptown, The Gastropig is a great stop for quick-serve breakfast sandwiches, lunch and weekend brunch. Their open, community atmosphere provides an excellent setting to watch the neighborhood, and all their ingredients are sourced from local purveyors. Even their coffee comes from small-batch roasters! So, order your Baconslut Sandwich at the counter, grab a seat outside, and settle in for a great breakfast. 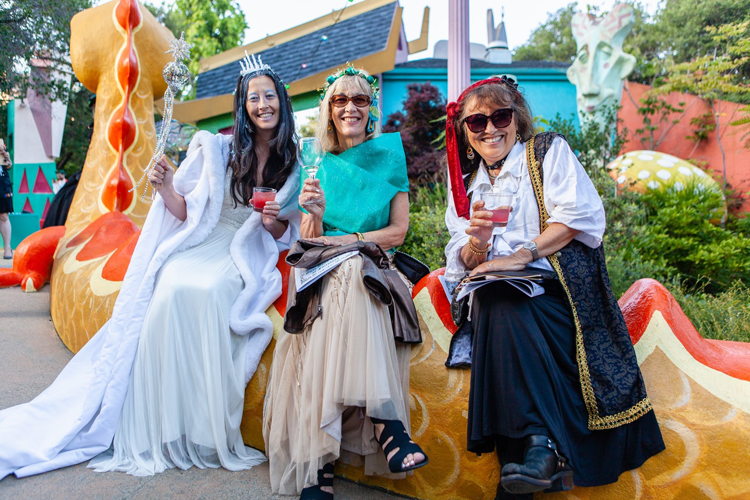 Before Disneyland and Nickelodeon came along, Children’s Fairyland opened on the shores of Lake Merritt in 1950. Designed as a storybook theme park for kids complete with fairy tale sets, farm animals and live entertainment, the park achieved nonprofit status in 1994 and still thrives today as a magical fantasy world filled with fun. Park attractions include gentle rides like Jolly Trolly and Flecto Carousel, live animals like miniature horses and friendly goats, blooming gardens, and storybook sets which recreate some of our favorite stories and legends. Who wants to take a stroll through The Alice in Wonderland Tunnel?! This is a great stop if you’re touring with kids!

The Gardens at Lake Merritt

Located on the shores of Lake Merritt, these gardens span seven acres of Lakeside Park, our nation’s first wildlife refuge. Throughout the grounds, you’ll find several different themed gardens, including the Edible Garden, the Palm Garden, the Rhododendron Garden, and the Bonsai Garden, which is home to The Historic Daimyo Oak Tree, estimated to be over 1,600 years old.

The Oakland Museum of California opened nearly 50 years ago and brought art, history and natural sciences together under one roof. In an effort to showcase and explore all the things that shape California—from its identity to its natural landscapes—the museum houses a collection of more than 1.9 million objects, including artworks, historical artifacts, ethnographic objects, natural specimens and photographs.

The Camron-Stanford House is the last of the 19th-century mansions that once surrounded Lake Merritt. Through the Victorian era, it was home to five influential families before becoming the very first museum in Oakland. Now beautifully restored, visitors can step inside to explore the world of the 1880s and even view special exhibits. For admission and current exhibition information, click here. 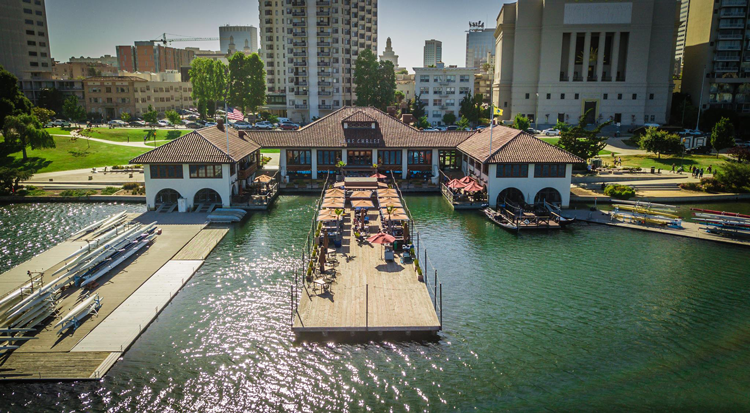 Highlighted in our guide, The Top 16 Oakland Happy Hours, Lake Chalet is located inside the 100-year-old Oakland Boathouse and offers a spacious outdoor deck where you can dine over Lake Merritt. All the ales on the menu are handcrafted at the team’s Chalet Brewery in San Francisco, and the food offerings include a raw bar and contemporary California cuisine with a focus on seafood. It’s the perfect place to stop for lunch!

A landmark space in Downtown Oakland, Joyce Gordon Gallery serves to bring together both Bay Area artists and international artists to celebrate our community’s social and cultural diversity and to make creative expression accessible to the public. Gallery exhibits prominently feature cutting-edge art produced primarily by black and African artists in all original mediums. 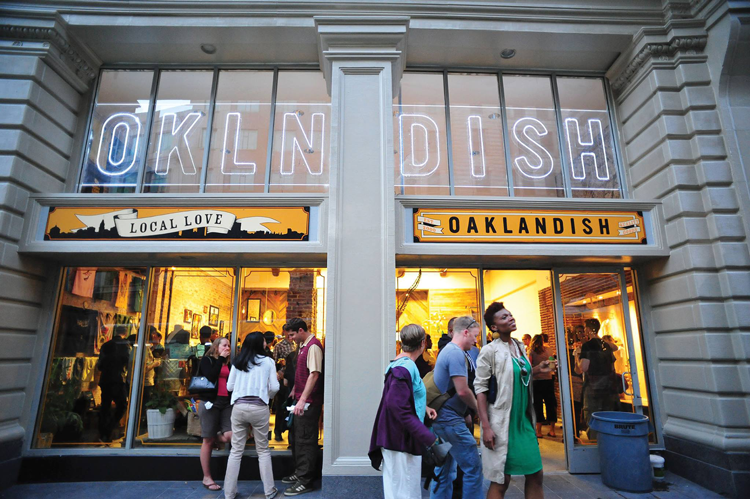 The headquarters of Oakland character, Oaklandish is a hyper-local shop where you can purchase city pride tees and all the accessories you need. The brand began in 2000 as a public art project celebrating Oakland’s local history and unique cultural legacy. Today, you can wear that art on your body; they have original t-shirts, hats, jackets, pins, patches, socks and so much more.

Awaken Cafe is a hip spot in downtown Oakland, but it’s much more than just a coffeehouse. In addition to being one of our favorite places for espresso drinks, this place is also a live music venue, craft beer and wine bar, and organic restaurant all rolled into one. Because the cafe very purposefully has no WiFi available, Awaken won’t be a good place to work online, but the environment has flourished into one of engagement, conversation and fun which makes it a great place to come together with our community and experience Oakland.

Part steel and part reinforced concrete, the defining structure of the Rotunda Building is its six-story, Beaux-Arts rotunda originally designed and built in 1912 as the new headquarters of Kahn’s Department Store. In 1991, restoration began on the building and, today, it’s a beautiful and historic event venue in Downtown.

The Fox was built in 1928 as an architectural masterpiece and movie house in the heart of Oakland. At the time, it was one of the premier destinations to see the new-fangled “talkies” which were quickly replacing silent films. After a $75 million renovation in 2009, it reopened as a concert hall under the direction of Another Planet Entertainment. Today, it’s one of the Bay Area’s best live music venues and it’s still right here in Downtown Oakland.

This undeniably quintessential Oakland destination combines beer, community and fun all in one amazing garden. Perfectly merging indoor and outdoor space, their beer garden features 21 rotating taps, lawn games, lush greenery and succulents, and food. On the front patio, you can even enjoy Lost & Found with your dog, and minors are allowed everywhere until 8 p.m. It’s the perfect spot to stop for a beer, and you can grab a full meal, too!

Hopscotch is a destination for daily brunch, lunch, happy hour and dinner. Chef Kyle Itani’s menu is made up of American regional classics influenced by Japanese flavors and techniques, and the food is complemented by a full bar and cocktail program. Because the menus change regularly based on seasonal, sustainably sourced ingredients, you’ll find something new to enjoy every time you stop by. And trust us, you’ll love it every time.

The Oakland Public Library has more than 15 locations throughout the city. This branch, the African American Museum and Library at Oakland, is dedicated to the discovery, preservation, interpretation and sharing of historical and cultural experiences of African Americans in California and throughout the West. The building is home to archives with more than 160 collections, a unique non-circulating reference library, and a second-floor museum, which regularly hosts traveling and original exhibitions highlighting the art, history and culture of African Americans.

Preservation Park is an original Victorian neighborhood encompassing two blocks of Downtown Oakland. More than 125 years old, the community began in the 1870s as an upscale residential neighborhood filled with elaborate, Victorian homes. Through the years, the neighborhood was affected by urban development, but by 1975, the area was protected and renovations began. Today, the park is home to 16 historic buildings: five stand in their original location and 11 were moved from elsewhere in Oakland to avoid demolition. To step inside and learn more about the history of these structures, visit the Pardee Home Museum.

The original Swan’s Marketplace opened in 1917 and served as Downtown Oakland’s premier market until its closure in 1983. In 1996, the East Bay Asian Local Development Corporation took over the redevelopment of the block to transform it into a community gathering place combining low-income and market-rate housing with small businesses and local nonprofits. Today, you can eat local foods, drink craft cocktails, enjoy craft beer, peruse local businesses and more in one building and the bustling block of Old Oakland.

In a word, Jack London Square is eclectic. Located at the waterfront just south of Downtown, the square was originally developed in the ‘70s as a tourist attraction. Over the years, it has grown into a trendy and entertaining neighborhood home to farmers’ markets, weekly events, annual festivals, and outdoor movies. Plus, it offers the perfect mix of local breweries, turn-of-the-century warehouses, packed bars, quiet lounges, delectable restaurants and modern architecture. To learn more about what you can find in the square, click here.

Want to add something to the itinerary?

In the comments below, tell us about your favorite places in Downtown Oakland!

September 27, 2019
Read Post
Fall in the Bay Area is one of our favorite seasons. We get to enjoy the bounty of wine country harvests, celebrate some of the year’s biggest and best events, and bask in the true summer weather of San Francisco—all with pumpkin patches and changing leaves as the backdrop. To make sure you celebrate in true Bay Area fashion, we compiled a fall bucket list showcasing...