Whether you’re already a huge comic book fan, you’re looking for a place to get into it, or you’re just celebrating Free Comic Book Day, the Bay Area is a good place to be. Our communities have built and fostered outstanding shops in every region where you can learn, read, find your community, or just shop for cool gifts. Either way, you’re celebrating books and supporting local. We dig it!

This bright, compact shop is the place to go in the Inner Sunset for new release comic books and back issues, too. Amongst their niche inventory, you’ll also find apparel and toys. 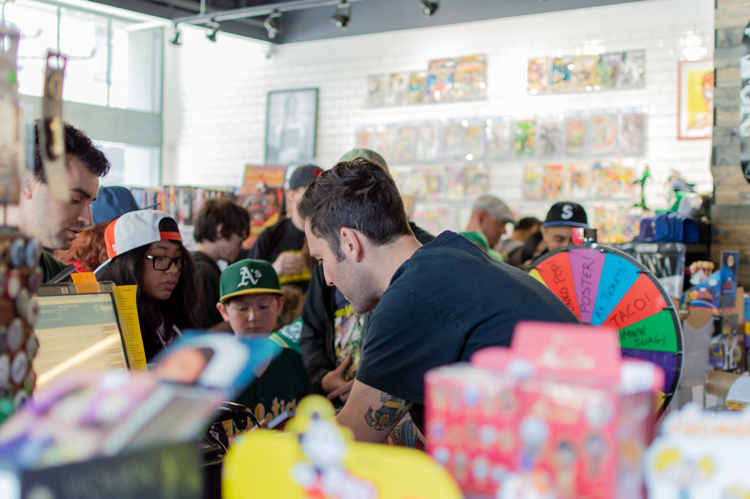 Located between 16th and 17th Streets in Downtown, this Oakland original is the heart of comic book culture in the East Bay. They’re open every day and have a huge inventory of apparel, pins, patches and all genres of new release and back issue comics. Be sure to follow the team on Facebook here to stay up-to-date on special events, signings and more.

Cards and Comics Central is literally cards and comics central in the city, because they’re the largest card and comic book retailer in San Francisco! They originally opened their neighborhood shop in 1986 and have moved four times since then, but the old-school, neighborhood character is alive and well! Inside, you’ll find all types of cards, toys and comic books.

This Fremont favorite opened for business in 2011 and has become the hub for comic book readers and gamers of all kinds. In addition to their huge inventory of books, they provide table space open for gaming in store! And if you love comics or want to get into them, their friendly, knowledgeable staff has made this a great place to start.

This Union City shop is run by a lifelong pop culture fan who always wanted his own store. When he and his team decided it was time, they created a friendly, neighborhood spot with an impressive inventory of comics, toys, statues, vinyl, cards, art prints and all other types of collectibles.

Comic Book Beardies truly began decades ago when Beardie #1 and comic book super fan decided that one day he would own a comic store of his own. Now, the two—Beardie #1 and Beardie #2—have been slinging comics for more than five years. In 2018, they moved and rebranded their store—previously called Whatever—and Comic Book Beardies was born. Follow them on Facebook here so you don’t miss their live online sales every Tuesday.

This San Leandro shop is female-owned and has been in business for more than 25 years. Inside, you’ll find action figures and figurines, t-shirts, games for the whole family, and comic books from a wide variety of publishers, including a large collection of back issues, trade paperbacks, graphic novels, Japanese and American Manga, and even a section dedicated to comics for young readers. 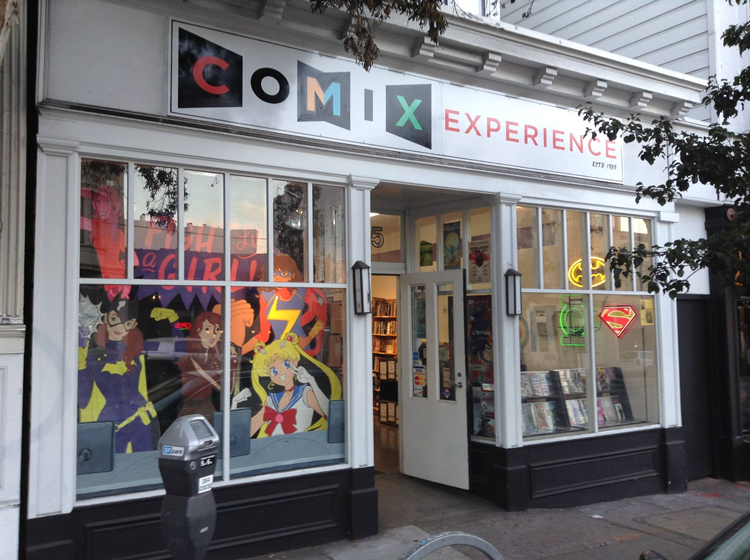 Comix Experience has been dedicated to selling comic books and graphic novels in the Bay Area since opening in 1989. Today, they operate Comix Experience in Haight-Ashbury and the Comix Experience Outpost in Ingleside Terraces. If you’re a serious fan, check out Graphic Novel Club for curated selections, private events and swag.

Located in the heart of Castro Valley next to the historic Chabot Cinema, this East Bay comic shop is family-owned and -operated. Their dedication to friendly customer service and their huge inventory of books—including new releases, back issues and trade paperbacks—makes their store one of the best in the Bay Area. You can check out some of their inventory online here. 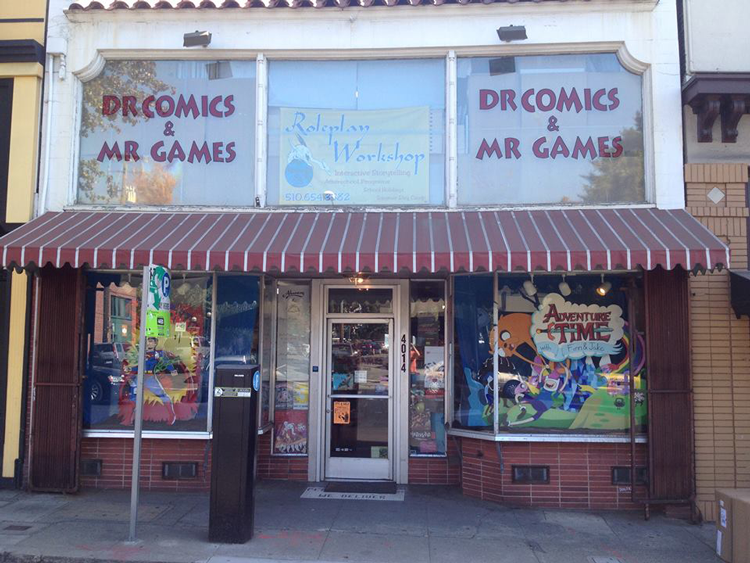 This beloved North Oakland shop has been in business since 1988. They offer an amazing selection of comics and graphic novels from every genre imaginable, staff-tested and -approved board games, and so much more.

Located in Berkeley right next door to Dark Carnival Bookstore, The Escapist boasts one of the largest selections of comics, graphic novels and vintage comics in the Bay Area. They even have an impressive collection of indie comics and zines from small independent presses, a dedicated vintage comics room, their own book club, and a podcast called “Escapist Comics Podcast” hosted by staff Jessica Balboni and Jesse Hett.

Located in the heart of Downtown Berkeley, Fantastic Comics is one of the friendliest neighborhood comic book stores on this list. They offer a wide variety of comic books, graphic novels and merchandise as well as a saver program for regular subscriptions and special events to celebrate sales, new releases and signings with comic book creators.

As the Diablo Valley’s comic book superstore since 1988, Flying Colors has developed an incredibly diverse selection of comics, trade paperbacks, back issues and other comic book-related merchandise. And founder of the store, Joe Field, has been entrenched in comics for decades. He successfully got Stockton named the birthplace of Marvel Comics’ Fantastic Four in 1986, then was hired by Stan Lee as the advertising director for WonderCon, Northern California’s largest comic book convention. It was after these experiences that he and his family opened Flying Colors and won the 1995 Will Eisner Spirit of Comics Award for Retailing Excellence.

Open every day of the year, Illusive carries the largest selection of comics and pop figures in Silicon Valley alongside a great selection of board games. Owned by Anna and Mark and operated by a talented (and proudly nerdy) team of sassy comic book lovers, this is the place to go for all your comic book needs—even if those needs are engagement photos! 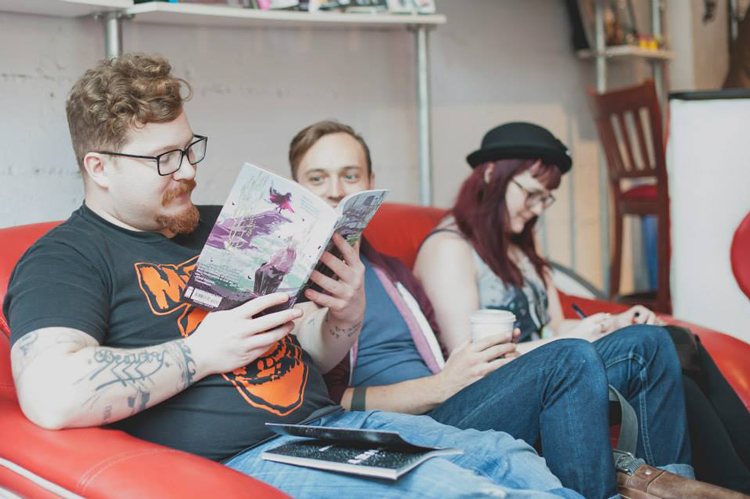 Inside their swanky lounge atmosphere, Isotope combines a comic store, an original comic art gallery, an active workshop and creative meeting place, and a relaxing getaway. The staff loves finding new titles, unearthing new creative teams, and keeping up with their favorite ongoing series which means you can find the most popular books alongside hand-printed minis you can’t find anywhere else. They also host regular comic book classes and provide space for artists and creators to create comics!

The Silicon Valley destination for all things comic books, Lee’s Comics buys old books, sells comic book supplies, and carries a full line of new comics and graphic novels as well as an extensive selection of rare comics and back issues. Their bright and welcoming store is open every day from 11 a.m. to 7 p.m.!

Located in the heart of the Mission, the mission at Mission is to combine a comic book shop with an art gallery in a way that showcases the unique strengths of the Mission District, its diversity, and its eclectic and energetic art community. This, combined with their friendly and super knowledgeable staff, has made it one of the best places in the city to shop for comic books and related merchandise.

Now located at 37244 Fremont Blvd in Fremont, this beloved locally owned and operated shop has a bit of a cult following in town, and it makes sense. Customers here are like family, whether you’re shopping for new releases on Wednesdays or you’re tracking down old Silver, Bronze and Copper books.

Do you love comics?

Tell us about your favorite Bay Area shops in the comments below! And check out Get to Know the Cartoon Art Museum in San Francisco to learn about a great place for cartoons and comic education in the city.

September 23, 2019
Read Post
Sushi in the Bay Area is not hard to come by—even world-class sushi prepared with the world’s highest quality fish. There are countless restaurants in San Francisco, Sonoma County, Silicon Valley, Oakland and every other Bay Area community serving up tasting menus, lunch menus, happy hour menus and sake menus all worth a taste. Even we have too many favorites...