Including all the spots you know and some you don’t, these are the essential activities, eateries, businesses and photo ops in San Francisco’s Fisherman’s Wharf. Our route will take you directly to these destinations while taking you past several other awesome shops, businesses, attractions and restaurants you’re welcome to stop in as well.

Whether you’re a local looking for something to do or a tourist trying to get a quick look around one of the city’s most tourist-friendly neighborhoods, you’ll find exactly what you need in this guide—donuts, Dungeness Crab, sourdough, craft beer and chocolate included. So, if you’re ready for a lot of history, a lot of tourists, and a lot of seafood, let’s get started! 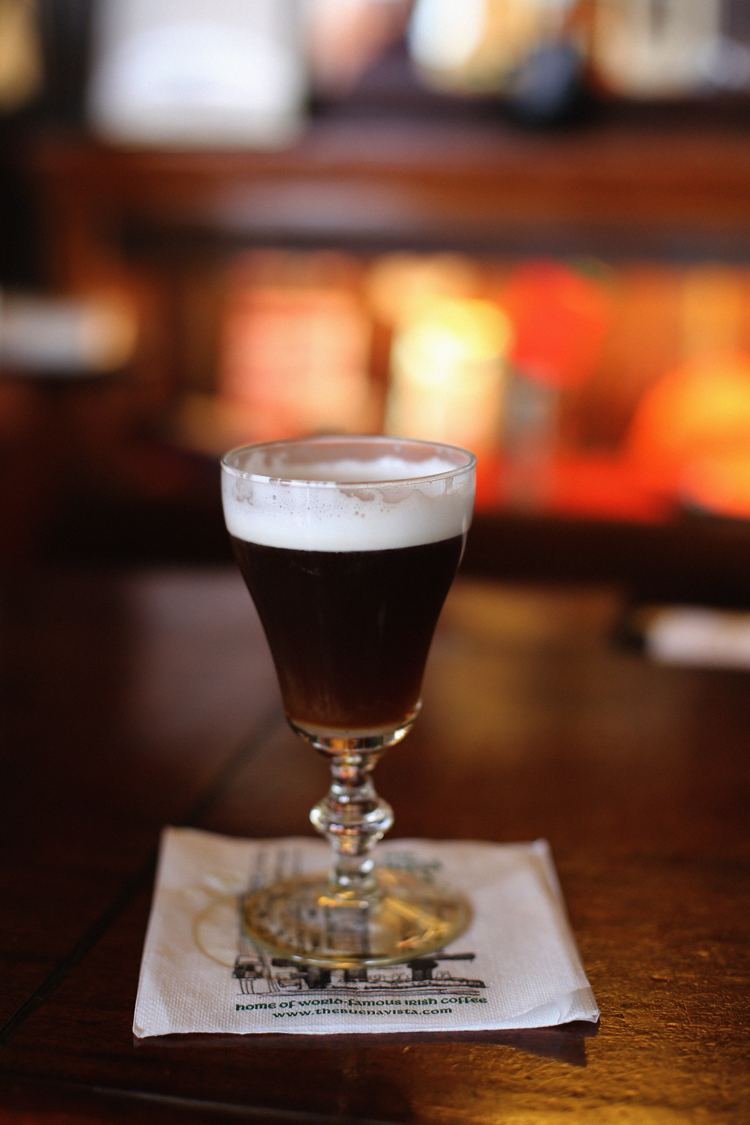 We’re starting our tour with breakfast and coffee at The Buena Vista. With the added bonus of offering breakfast all day, this restaurant is one of San Francisco’s most historic restaurants. It was 1916 when the first floor of the building was converted from a boarding house to a saloon. Ever since, it’s been a mainstay for visitors, locals, fishermen and business people alike. If you’re looking for the most famous thing on the menu, start your meal with an Irish Coffee.

The Cartoon Art Museum was founded in 1984 as a place for art lovers, comic connoisseurs and anyone who grew up watching Saturday morning cartoons. From comic strips, comic books and anime to political cartoons, graphic novels and underground comics, you’ll find something for the whole family to love—and to learn! Their newest homebase is found in the heart of Fisherman’s Wharf, and you can learn more about it in our article Get to Know the Cartoon Art Museum in San Francisco.

Encompassing a fleet of historic ships, a Visitor Center, the Maritime Museum, the Maritime Research Center and the Aquatic Park Historic District, this National Historic Park showcases the sights, sounds, smells and stories of Pacific Coast maritime history. In addition to more than five other ships, this park is the homebase for Alma, an 1891 National Historic Landmark scow schooner which was featured in The 15 Coolest Water Activities in the Bay Area because you can set sail aboard her! For more activities, sights and history in the park, click here.

A true San Francisco institution, Scoma’s has been serving seafood with the same local and fresh philosophy since 1965. Everything is caught in the Pacific on small boats and brought to the pier by local fishermen so you can taste the freshest fare right on the water.

On our way into the lively heart of Fisherman’s Wharf, we’ll pass the iconic sign. Be sure to snap a photo!

Ripley’s Believe It or Not! San Francisco

At Ripley’s, you’ll find immersive experiences like Ripley’s Marvelous Mirror Maze and Ripley’s Impossible Laserace alongside about a dozen interactive galleries showcasing the bizarre and the mysterious. You can see everything from shrunken heads and an Egyptian mummified foot to the world’s tallest man and a real vampire kit. To purchase tickets online, click here.

If you haven’t had a celebrity sighting in the city yet, stop by Madame Tussauds. This world-famous wax figure collection offers exhibits like Music Zone with sculptures of everyone from Michael Jackson to Beyonce, Leaders and Entrepreneurs, and Spirit of San Francisco with some of the city’s most renowned characters, including Robin Williams and Jerry Garcia!

Boudin at the Wharf

For both good food and great fun, head to the flagship and headquarters of Boudin Bakery. In addition to the upscale Bistro Boudin and Bakers Hall—which offers a marketplace, café and espresso bar—you can watch the bakers making fresh bread by hand through the 30-foot observation window. For even more, check out the Museum and Bakery Tour, which explores the history of Boudin Bakery in San Francisco and offers even more views inside the facility.

Aquarium of the Bay 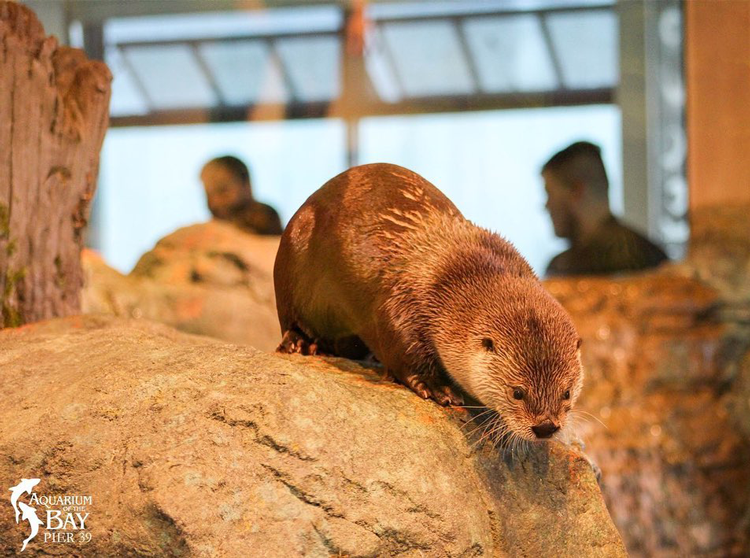 Photo courtesy of Aquarium of the Bay

This famous San Francisco aquarium is suited for all ages! The facility is located on the waterfront of PIER 39, is a Smithsonian affiliate, and is home to more than 20,000 marine animals. As you explore walk-through tunnel exhibits, transparent touch pools and a bubbling mountain stream exhibit, you can meet sharks and rays, octopi, jellyfish, anchovies, river otters and more. For admission information, click here.

And, now that we’ve arrived at PIER 39, you can learn about all their attractions and stories on the website here.

Featured in The 13 Best Donuts in San Francisco, Trish’s makes every list of the city’s best donuts because they really do serve some of San Francisco’s best. And you can buy them by the bag, the bucket or the bathtub! Operating for more than 23 years, Founder Trish Conklin now owns and manages six different food retail businesses in the Bay Area and Los Angeles. Be sure to pick up your bucket of donuts next time you’re at PIER 39.

This PIER 39 classic is a psychedelic labyrinth of mirrors set amongst black lights and vibrant colors. The attraction was originally created by Charles Magowan in 2009 and offers one of the area’s best experiences for just $5. It’s definitely worth it, and children 5 years old and younger are admitted for free! 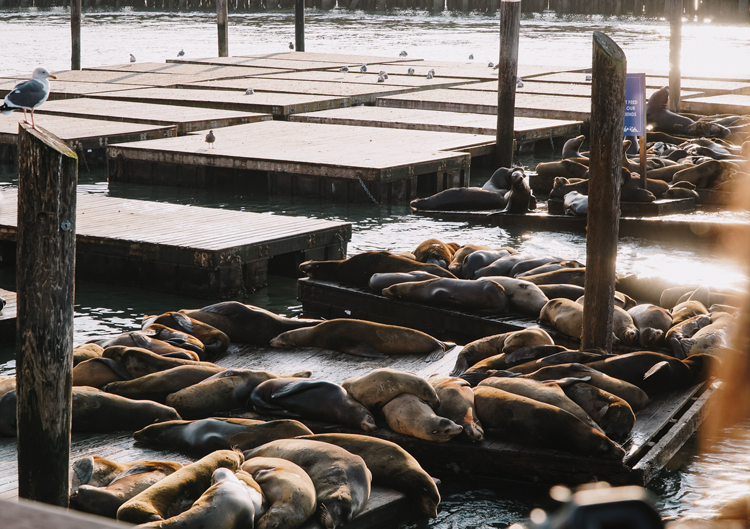 Possibly the most well-known attraction at PIER 39 can be found at K-Dock. This is where hundreds of sea lions make their home throughout the year—just a few feet from the viewing dock! While their numbers rise and fall with the seasons, you can always find a sea lion or two, because these marine animals have called this spot home since 1989. For the full story, click here. 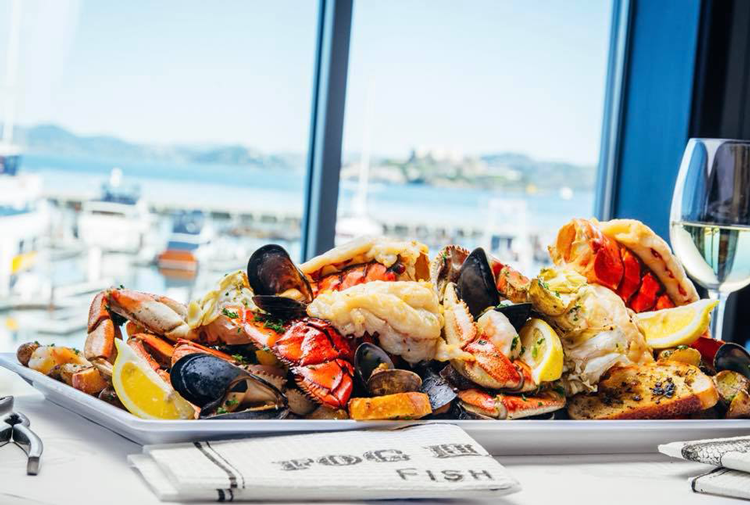 Created by the family who developed PIER 39, the history of Fog Harbor Fish House spans three decades and three generations. Still family-owned and operated, the restaurant was also the first restaurant in Fisherman’s Wharf to serve 100% sustainable seafood. Stop by to taste the food for yourself and enjoy complimentary sourdough bread baked in-house every hour. And that all comes with stunning waterfront views, too!

We’re making a stop at Frankie’s because they serve some of the best seafood and they’re featured in our guide Where to Find the Best Beignets in the Bay Area. That’s right! Alongside the world famous Fishwich and seaside views, you can order fresh-made beignets available in orders of one, three, six or 13.

Made famous by Anne Hathaway and Julie Andrews in “The Princess Diaries”, Musée Mécanique houses one of the world’s largest privately owned collections of coin-operated mechanical musical instruments and antique arcade machines in their original working condition. That means you can play and interact with more than 200 antique games and machines! Located on Pier 45, Musée Mécanique offers free admission every day.

Of the 2,710 Liberty ships built and launched during World War II, the SS Jeremiah O’Brien is one of two that remain fully functional. Most notably, this San Francisco attraction is the last unaltered Liberty ship and remains historically accurate. Admission is available from $10 for children ages 5 through 12 and active military up to $40 for a family of four. And children under 5 years old are admitted for free!

This landmark seafood restaurant has been serving some of the city’s best seafood right on Fisherman’s Wharf for more than 90 years. As one of the city’s oldest family-owned and -operated restaurants, you can expect history and outstanding, fourth-generation recipes alongside Bay views. You can preview the seasonal lunch and dinner menus here.

If you’re looking for a full bar, a dining room with a waterside view, or a lively patio, we recommend making a stop at Castagnola’s. This San Francisco institution is one of the oldest in the city (it was founded in 1916!) and they lay claim to the original Dungeness Crab Cocktail. Founder Tomaso Castagnola introduced his invention at the San Francisco World’s Fair in 1915 and opened a crab stand the very next year. And that little crab stand became Castagnola’s as it is today.

Circling back near our starting point, we’re ending our tour inside the famous Ghirardelli Square for dessert at The Original Ghirardelli Ice Cream & Chocolate, craft beer at San Francisco Brewing Co. and/or wine at Wattle Creek Winery. If you want to keep the fun going, other attractions in the square include Subpar Miniature Golf, The Cheese School of San Francisco and Culinary Artistas.

Where did you stop?

Did you find a great spot along our route that isn’t on this list? Tell us about it in the comments below, so other readers can stop there, too!

September 27, 2019
Read Post
Fall in the Bay Area is one of our favorite seasons. We get to enjoy the bounty of wine country harvests, celebrate some of the year’s biggest and best events, and bask in the true summer weather of San Francisco—all with pumpkin patches and changing leaves as the backdrop. To make sure you celebrate in true Bay Area fashion, we compiled a fall bucket list showcasing...